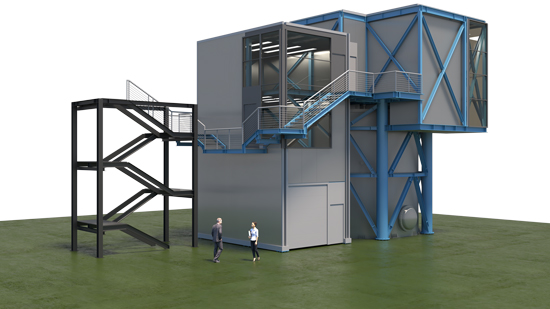 This is the challenge of the COSINUS Collaboration, a new experiment for direct Dark Matter search which recently received green light to start its construction at the Gran Sasso National Laboratory (LNGS) in Italy.

Very abundant in the Universe, yet still of unknown nature, Dark Matter is one of the hot-topics of modern astro-particle physics. Research in this field is carried out all over the world working with different technologies: at earth, in underground laboratories, with or in space, with experiments set on satellites. Nonetheless, we still don’t have clear evidence of what exactly is Dark Matter so far.

The COSINUS Collaboration is willing to contribute to the global efforts in this field by adding an important piece of the puzzle.

The basic concept of the experiment was born in 2015 thanks to an idea of Karoline Schäffner (Max Planck Institute, Munich) and Florian Reindl (HEPHY and Technical University of Vienna): COSINUS aims at identifying the interaction of a dark matter particle in a scintillating crystal of sodium iodide at cryogenic temperatures.

The approach of COSINUS is to run sodium iodide crystals at extremely low temperatures, just above absolute zero: -273°C. The energy released by a particle inside the crystals is able to determine a tiny increase in temperature, which can be measured using a special thermometer. At the same time, the scintillating properties of the crystals allow to discriminate particles exploiting the different light signals with equal absorbed energy. “By combining temperature and light measurements, we can clearly distinguish between dark matter and other particles”, says Schäffner. "Our temperature sensor is well-proven having already been developed by colleagues at Max Planch in Munich for the experiment CRESST, running at LNGS as well”.

COSINUS chose this type of crystal in order to make a comparison with the experiment DAMA, using the same detection material: Dama has indeed reported to have observed a signal matching with dark matter one. No other experiment has however confirmed this signal so far.

The research and development phase of the detector, has been succesfully conducted from 2016 to 2019 thanks to a 289.000 € funding granted by INFN National Scientific Committee V to Schaeffner.

The results obtained led to a Collaboration, between Germany, Italy, Austria and China, that has developed the proposal for the realization of the experiment.

In 2020, COSINUS received the go-ahead from the scientific management of the LNGS. Here, 1,400 m below the Gran Sasso massif, the experimental apparatus will be installed. “LNGS is a unique place in the world: it is the only place where it is possible to realize such sensitive and technologically advanced experiments” says Florian Reind spokesperson of the COSINUS Collaboration. “LNGS has a long tradition of experiments based on bolometric techniques which gave life to a solid research group, experienced in the use of crystals operating at temperatures close to absolute zero” adds Stefano Pirro, researcher at LNGS.

The construction of the experiment will begin in 2021, the first measurements are supposed to start in 2022, and the first experimental results in 2023. The apparatus consists of a water tank, with a height and diameter of 7 m, filled with ultra-pure water which hosts in its center a cryostat able to low the sodium iodide crystals temperature to -273°C.

The development of the electronics is entrusted to the Institute HEPHY/TU of Wien, while crystals are produced in China.

“COSINUS is offering us the great opportunity to perform an interdisciplinary research” says Natalia Di Marco researcher at GSSI and Italian responsible for the experiment. “Since 2019 we have been involving in the Collaboration solid state physics experts from the University of L’Aquila. Using sodium iodide crystals at cryogenic temperature is indeed a technological challenge which requires complementary competencies to that of astro-particle physicists”. “We are carrying out theoretical and experiments on sodium iodide crystals to understand thoroughly the mechanism of heat transport and foresee its behavior”, says Adriano Filipponi, from the Physical and Chemical Sciences Department.

The experiment will be realized thanks to the commitment of the Max Planck Society (Germany), which contributes to the project with a total funding of 3 millions €, of INFN, in particular of LNGS which contributes both in terms of resources and infrastructures in Italy, and the Institute HEPHY in Austria. The Helsinki Institute of Physics (Finland) has recently joined the Collaboration.