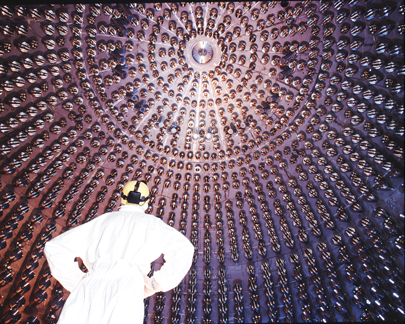 The results were obtained in Italy, at the INFN Gran Sasso Laboratories, by an international scientific collaboration. The Borexino scientific collaboration, an experiment at the Gran Sasso National Laboratories of the Italian National Institute for Nuclear Physics (INFN), publishes today, in Nature the announcement of the first ever detection of neutrinos produced in the Sun by the CNO cycle (carbon-nitrogen-oxygen).

It is an experimental result of historical value, which completes a chapter of physics that started in the 1930 decade of the last century. The implication of this new measure for understanding stellar mechanisms is enormous: in fact, since the CNO cycle is predominant in the most massive stars than the Sun, with this observation Borexino has reached the experimental evidence of what is in fact the dominant channel in the universe for hydrogen burning.

Previously Borexino had already studied in detail the main mechanism of energy production in the Sun, the proton-proton chain, through the individual detection of all neutrino fluxes that originate from it. Now, by measuring the neutrinos produced by the CNO cycle, which is present in the Sun at 1% level, Borexino provides the first experimental evidence of the existence of this additional energy generation mechanism.

"Now we finally have the first groundbreaking, experimental confirmation of how the stars, heaviest than the Sun, shine" points out Gianpaolo Bellini, professor at the University of Milan and INFN researcher, one of the founding fathers of the experiment and spokesperson of Borexino for 22 years. Bellini led the group of researchers and technicians of the University of Milan (La Statale) and of the INFN division of Milan that exactly 30 years ago started the conception of the experiment.

"This is the culmination of a thirty years long effort, which began in 1990, and of more than ten years of Borexino's discoveries in the physics of the Sun, neutrinos and finally stars," Bellini concludes. Since 1990 the Milan group played a key role in the design and construction of the detector, with a contribution from the University of Princeton, and afterwards with the INFN groups of Genoa, Gran Sasso, Perugia, within the international collaboration

Solar neutrinos can only be observed with highly sensitive detectors, which can exclude most sources of background signals. To achieve the required sensitivity, the Borexino experiment was built with an onion-like design, characterized by layers of increasing radiopurity, making it a unique detector in the world for the ultra-low background level achieved, never obtained by any other experiment. In addition, the depth of the experimental Hall of the Gran Sasso Underground Labs protects it from cosmic radiation, with the exception of neutrinos that pass through Earth matter undisturbed.

Measuring the neutrinos of the CNO cycle was a complicated task that required a great deal of effort in both hardware and software. "Despite the exceptional successes previously achieved and an already ultra-pure detector, - explains Gioacchino Ranucci, researcher of the INFN section of Milan, current co-spokesperson of Borexino - we had to work hard to further improve the suppression and understanding of the very low residual backgrounds, so that we could identify the neutrinos of the CNO cycle."

"The detection of neutrinos produced in the CNO cycle announced by Borexino is the crowning of a relentless, years-long effort that has led us to push the liquid-scintillator technology beyond any previously reached limit, and to make Borexino's core the least radioactive place in the world," comments Marco Pallavicini, professor at the University of Genoa and member of the INFN Executive Board, currently co-spokesperson for the experiment.

The existence of the CNO cycle was first theorized in 1938, when scientists Hans Bethe and Carl Friedrich von Weizsacker independently proposed that the fusion of hydrogen in stars could also be catalyzed by the heavy nuclei carbon, nitrogen and oxygen, in a cyclical series of nuclear reactions, in addition to proceeding according to the sequence of the proton-proton chain.

Despite indirect evidence from astronomical and astrophysical observations, direct experimental confirmation of the hypothesized stellar energy generation mechanism could not be easily obtained. The attempts to unveil it focused on neutrinos, particles produced in abundance in these reactions, leading to the start-up, in the 1960s, of the Solar Neutrino scientific program, which originated results of great importance for particle physics.

With this measure, Borexino, who is nearing the conclusion of his scientific activity, after demonstrating how the Sun shines, also leaves the neutrino field with the enduring legacy of the first observation of CNO neutrinos, a revolutionary achievement obtained through an impressive experimental effort, which will remain for the future as one of the fundamental successes of astrophysics and astroparticle physics.

In the course of this fascinating enterprise of unravelling the mysteries of the Sun and stars, which lasted almost a century, solar neutrinos were also instrumental in identifying the phenomenon of neutrino oscillation, one of the greatest discoveries of particle physics of the new millennium.