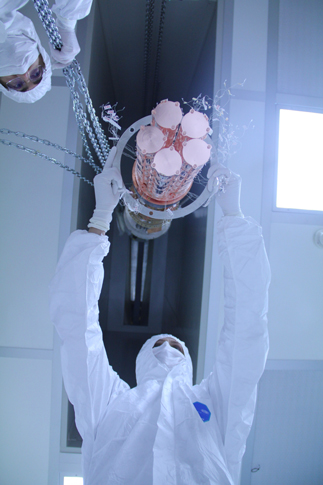 The CUPID-0 experiment, taking data at the Gran Sasso National Laboratory, made the most precise measurement in the world of double beta decay with the emission of two neutrinos.

It is a very rare nuclear process, observed for different isotopes by different experiments; among all, CUPID-0, studying the decay of Se-82, not only obtained an incredible level of accuracy, but also managed to reveal important information to understand the dynamics of this nuclear process. The outcome of this work was published on December 27 in Physical Review Letters (Link).

Prof. Francesco Iachello, creator of the Interacting Boson Model (IBM), underlines the impact of this measure: “The result that Se-82 two-neutrino double-beta decay is dominated by a single intermediate state is very important in understanding the microscopy theory of 2vbb decay. Up to this point I, Ejiri and others thought that only Zr-96, Mo-100 and Cd-116 were dominated by a single intermediate state, while Ge-76 and Se-82 were not. The result changes our thinking and needs to be understood.”

"The use of the bolometric technique and the detailed control of the radioactive background have allowed a detector of small dimensions such as CUPID-0 to accurately overcome the giants of the sector, showing the potential of this technique, developed from the first steps inside INFN: This result represents a milestone towards the realization of the future CUPID experiment ”comments dr. Stefano Pirro (LNGS), head of the experiment".

Currently cryogenic calorimeters have allowed to obtain the best measures of the double beta decay with two neutrinos and the best limits for the zero neutrino process of three isotopes, Te-130 (CUORE), Mo-100 (CUPID-Mo) and Se-82 (CUPID-0), proving to have all the requirements for a new generation experiment.

The CUPID-0 experiment consists of an array of 26 zinc selenide crystals (ZnSe), 24 of which are 95% enriched in Se-82, the isotope that decays double beta.

The single CUPID-0 detector works as a cryogenic calorimeter.

A cryogenic calorimeter is -usually- made up of a crystal coupled with a very sensitive thermometer: when a crystal is cooled, bringing its temperature to 0.01 absolute Kelvin degrees, extremely close to absolute zero (-273.14 degrees Celsius), a minimum and imperceptible release of energy in it produces an increase in its temperature. The rise in temperature is proportional to the energy released, which is thus measured with extreme accuracy.

In some crystals, the release of energy can determine even a minimum production of light which, "going out" from the crystal, can be measured, providing additional information from which the nature of the particle that has interacted in the crystal can be inferred. This possibility represents a fundamental tool to break down the natural radioactive background (coming from all the materials that surround us) that "mimics" the expected signal. Considering that at such extreme temperatures the "standard" light detectors do not work, ad hoc light detectors have been developed. These are very sensitive "opaque" calorimeters: when the light (quantifiable in a few hundred photons) is emitted by the ZnSe crystal, it is absorbed by the "opaque" bolometer. This minimum amount of light is however sufficient to heat the calorimeter-light detector and the measurement of the rise in temperature directly returns the number of photons that have been emitted by the ZnSe crystal. This technique, developed in Italy as part of the LUCIFER project since 2006, was proposed for the construction of a future new generation experiment, CUPID, of which CUPID-0 represents the first demonstrator.

In addition to this result on the two-neutrino decay, CUPID-0 reported the best limit on the average life of the Se-82 neutrino-free double beta decay, T1/2>3.5 1024 y (90% C.I.) (LINK), studying this same decay also on excited states (LINK).

Furthermore, the detailed reconstruction of the spectrum measured by CUPID-0 made it possible to identify contributions to the fund in the region of interest (LINK) and to perform the first search for CPT violation with cryogenic calorimeters (LINK).

The first phase of CUPID-0 ended in December 2018, accumulating an exposure of about 10 kg⋅y of ZnSe. In order to understand some details of the reconstruction of the background, changes were made to the experimental setup, removing the reflective sheet that wrapped each crystal and adding an additional 10 mK heat shield. From May 2019 CUPID-0 is taking data in its new configuration.