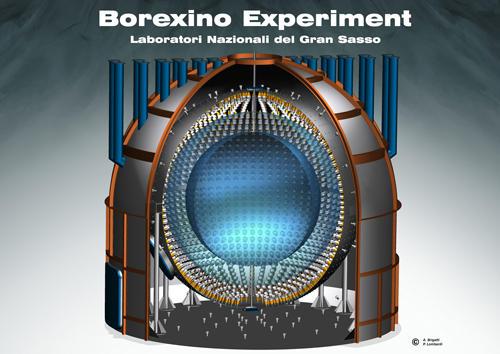 Protected by the Gran Sasso massif from radiation coming from space, and thus immersed in what is called cosmic silence, Borexino is the purest experiment in the world for the measurement of neutrinos, not only those coming from the Sun but also those coming from bowels of the Earth, the so-called geoneutrinos.

After more than ten years of acquisition and a sophisticated data analysis, the international collaboration that leads the experiment of the INFN Gran Sasso National Laboratories has published the new results on geoneutrinos in the journal Physical Review D. The article has been selected as Editors' Suggestion, among the papers considered of major importance and scientific interest.

"For the first time the signal of neutrinos produced by the radioactive decay processes of uranium and thorium distributed in the Earth's mantle has been clearly observed, allowing to exclude the absence of radioactivity in the depths of the Earth with 99% probability", explains Gioacchino Ranucci, researcher of the INFN Section of Milan and co-manager of the scientific collaboration Borexino.

The published result shows that much of the heat given off by the bowels of the Earth derives from the radioactive decay of uranium-238 and thorium-232 present in the Earth's mantle, almost 3,000 km thick, on which rests the thin crust we walk over. In fact, Borexino researchers estimated with a high probability (about 85%) that radioactive decays in rocks produce more than half of the earth's heat, with a predominant role of the mantle compared to the crust. This evidence opens up new scenarios in the global geochemical exploration of our planet. Having established a minimum abundance value of uranium and thorium in the Earth's mantle, it is possible to affirm that a not negligible portion of the energy that feeds volcanoes, earthquakes and the Earth's magnetic field is produced by terrestrial radioactivity.

"The publication not only collects the new results but also presents a methodology of analysis that can be adopted by new generation experiments, which will see INFN protagonist at an international level", underlines Marco Pallavicini, researcher of the INFN Section of Genoa and co-responsible for the scientific collaboration Borexino. "The next challenge is to be able to measure geoneutrinos from the mantle with greater statistical significance, perhaps with detectors distributed in different places on our planet."

The study of geoneutrinos

Neutrinos are elusive particles: due to their very small, almost zero mass, and the fact that they are neutral, that is, they do not have an electric charge, they interact very little with matter and this makes their observation difficult.

Every second, about a million geoneutrinos cross a square centimeter of the Earth's surface. These particles are produced by terrestrial natural radioactivity and represent one of the few probes that we have available to directly explore the bowels of the Earth. The intense magnetic field, the incessant volcanic activity and the movement of the lithospheric plates are just some of the peculiarities of our planet, which make it unique among the planets of the solar system. Many of these fascinating phenomena that we observe on the surface originate at depths of several thousand kilometers and their origin remains unknown. Not being able to explore the mantle and the Earth's core directly, we just have to get information from seismic waves or rock samples brought to the surface by tectonic movements.

In the middle of the last century George Gamow and the Nobel prize for physics Fred Reines considered the possibility of measuring geoneutrinos to study the radioactive decays that take place inside the Earth, but immediately the challenge seemed too difficult to each of them: it was clear that the very low probability of interaction with matter made it difficult to reveal geoneutrinos, which remained hidden in the background noise produced by radioactivity of terrestrial and cosmic origin. Now, almost seventy years later, in the Gran Sasso National Laboratories, what seemed impossible at the time has become a scientific result, thanks to the extreme purity and sensitivity of the Borexino experiment.