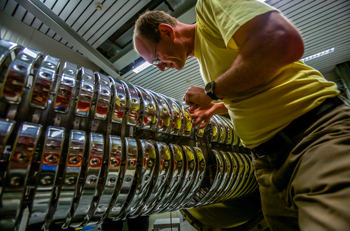 The LUNA experiment sheds light on the density of matter that makes up everything we know of in the universe. There is a key process – in the sequence of reactions known as Big Bang Nucleosynthesis – that led to the production of the lightest chemical

elements in the first moments of life of our universe: it is the reaction by which a proton and a nucleus of deuterium fuse together to form the stable isotope of helium, called Helium-3.

This reaction has now been studied with unprecedented precision at LUNA (Laboratory for Underground Nuclear Astrophysics), at the Gran Sasso National Laboratories of the INFN. Thanks to this study, it has been possible to refine the calculations of the primordial nucleosynthesis and to obtain an accurate determination of the density of ordinary (or “baryonic”) matter, which makes up everything we know of, including living species.

The results of the measurement conducted by the LUNA Collaboration, and their cosmological impact were published today in the journal Nature [insert link].

"In this particular study - explains Gianluca Imbriani, spokesperson for the LUNA collaboration – in addition to our longstanding expertise in the field of experimental nuclear astrophysics, we have benefited from the precious contribution of the theoretical group of astroparticle physics and theoretical cosmology of the Federico II University of Naples, to arrive at an accurate determination of the baryon density using the Parthenope code for primordial nucleosynthesis calculations. An important contribution to the description of nuclear interaction was also provided by the theoretical nuclear physics group of the University of Pisa.”

During their lifetime, stars convert light chemical elements into heavier ones through nuclear fusion processes. However, not all chemical elements are produced in the stars: protons and neutrons, which form the building blocks of all chemical elements, were created in the very first moments of existence of our universe. About 3 minutes after the Big Bang, the temperature of the universe dropped to one billion degrees and deuterium could finally be produced by the fusion of protons and neutrons, without being destroyed by high-energy photons. That was the beginning of the synthesis of light elements, known as primordial nucleosynthesis.

In the cosmic silence of the underground Laboratories of Gran Sasso, where 1400 m of rock protect the experimental halls from external radiation, the LUNA experiment is able to recreate the processes that occurred during primordial nucleosynthesis and that still occur in stars today. With the LUNA accelerator we have brought the clock back in time to a few minutes after the birth of our Universe. The abundance of primordial deuterium is mainly controlled by the fusion reaction studied at LUNA during extensive experimental campaigns. The density of baryon matter obtained through our LUNA results is in excellent agreement with the value inferred from the study of the cosmic background radiation, the "fossil" residue of the Big Bang.

"The LUNA experiment - adds Imbriani - will continue its scientific activity over the next decade with the LUNA-MV project, focused on the study of key reactions important to understand the chemical composition of the universe and the nucleosynthesis of the heavy elements".

LUNA is an international collaboration of about 50 scientists from Italy, Germany, Hungary and the United Kingdom. The list of collaborating institutions includes: the National Laboratories of Gran Sasso, the INFN sections and the Universities of Bari, Genoa, Milano Statale, Naples Federico II, Padua, Rome La Sapienza, Turin, and the INAF Observatory of Teramo (Italy); the Helmholtz-Zentrum Dresden-Rossendorf (Germany), the ATOMKI in Debrecen and the Konkoly Observatory of Budapest (Hungary); and the School of Physics and Astronomy of the University of Edinburgh (United Kingdom).