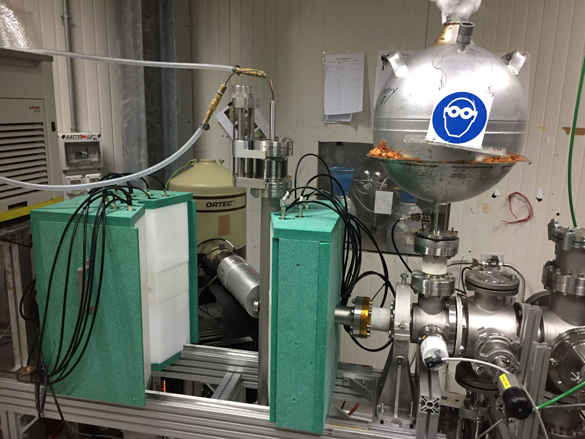 For decades, physicists and astrophysicists have been wondering about the origin of the elements heavier than iron. To produce them for the stars, neutrons are needed, which, being uncharged, are easily captured by other ions, allowing the synthesis of elements such as Cadmium, Tugsten or Lead.

The most important source of neutrons in stars is the capture that generates a nucleus of 16O and releases a neutron by the process, 13C(α,n)16O, after a long experimental campaign of about 4 years, the international collaboration LUNA (Laboratory for Underground Nuclear Astrophysics), which operates at the Underground National Laboratory (LNGS) of INFN, measured the speed of this process with very high precision directly at stellar temperatures.

The results of this work were published in the American Physical Society's Physical Review Letters.

Gianluca Imbriani, spokesperson for the LUNA collaboration underlines that "our knowledge of the cross section of the process of capturing an alpha particle by a 13C nucleus, in the range of astrophysical energies, has so far been based on extrapolations from measurements to higher and from experiments based on indirect techniques, leading to great uncertainties in the determination of the production rate of neutrons in stars ”.

"About 50% of the elements heavier than iron present on Earth and in the Solar System were produced by stars with a mass slightly larger than that of the Sun, which lived before its formation 4.5 billion years ago - says Oscar Straniero, astrophysicist of INAF and collaborator of LUNA -. When they become red giants, ideal conditions develop within these stars for the activation of the 13C(α,n)16O process, which initiates the synthesis of heavy nuclei ".

"Thanks to the greatly reduced background level in the Gran Sasso underground laboratory - add Alba Formicola and Andreas Best, who coordinated the work for this measurement - LUNA is the only experiment to date that has managed to directly measure the process 13C(α,n)16O in the energy window of astrophysical interest, drastically reducing the uncertainties. This will have a great impact on the prediction of the formation of a series of heavy elements, the synthesis of which strongly depends on the speed of this process."

"The LUNA experiment will continue its scientific activity in the next decade thanks to the LUNA-MV project - concludes Matthias Junker, local responsible for the Gran Sasso National Laboratories of the LUNA collaboration -, which will focus on the study of the key processes to determine the evolution of massive stars, important for understanding the chemical composition of the universe."

About 50 scientists from universities and research institutes from Italy, Germany, Hungary and the United Kingdom collaborate with LUNA. For this measurement a contribution in particular should be underlined, and it is that of the Atomki laboratory in Debrecen, Hungary, where targets necessary for this experiment have been developed.

For further information, please contact: Gianluca Imbriani This email address is being protected from spambots. You need JavaScript enabled to view it.