Stepwise process for approval and support of new experiments at LNGS

The process is subdivided into three main steps, referring to three milestone documents.

The Letter of Intent (LoI) is submitted by a proto-Collaboration to the LNGS Scientific Committee. It is essentially a scientific paper in which a preliminary design of the experiment, its science goals, feasibility and need of resources are outlined.

It is submitted to the Scientific Committee, at least 60 deys before the SC meeting.

A recommendation by the Scientific Committee will be based on the evaluation of the scientific potential of the experiment, on its consistency with LNGS strategy and on a preliminar evaluation of its feasibility.

The reccommendation by the SC activates Step 2.

The Conceptual Design Report shall report:

LNGS Scientific Committee and LNGS Director will proceed to an evaluation of the CDR in order to assess the scientific interest and the sustainability by LNGS.

Funding Agencies (FA) are expected to assess the scientific goal, verify the availability of resources and, in case of positive evaluation, commit to funding.

Step 2 may require several R&Ds. In case R&Ds require LNGS resources, agreements among LNGS and the participating Institutions will be required and shall be based on technical documents.

The TDR shall be submitted to the LNGS Director.

The Technical Design Report is evaluated by LNGS Director and technical staff in order to verify that:

Lack of compliance will result in iteration of Step 2.

A further evaluation by LNGS Scientific Committee may occur.

Approval at Step 3 level is final. The approval shall be followed by agreements with LNGS on resources, maintenance and operation, and by MoU among collaborating Institutions and INFN as host Institution according to INFN “General Rules Applicable to Experiments at INFN National Laboratories”.

A scheme of the process is shown in the following figure. 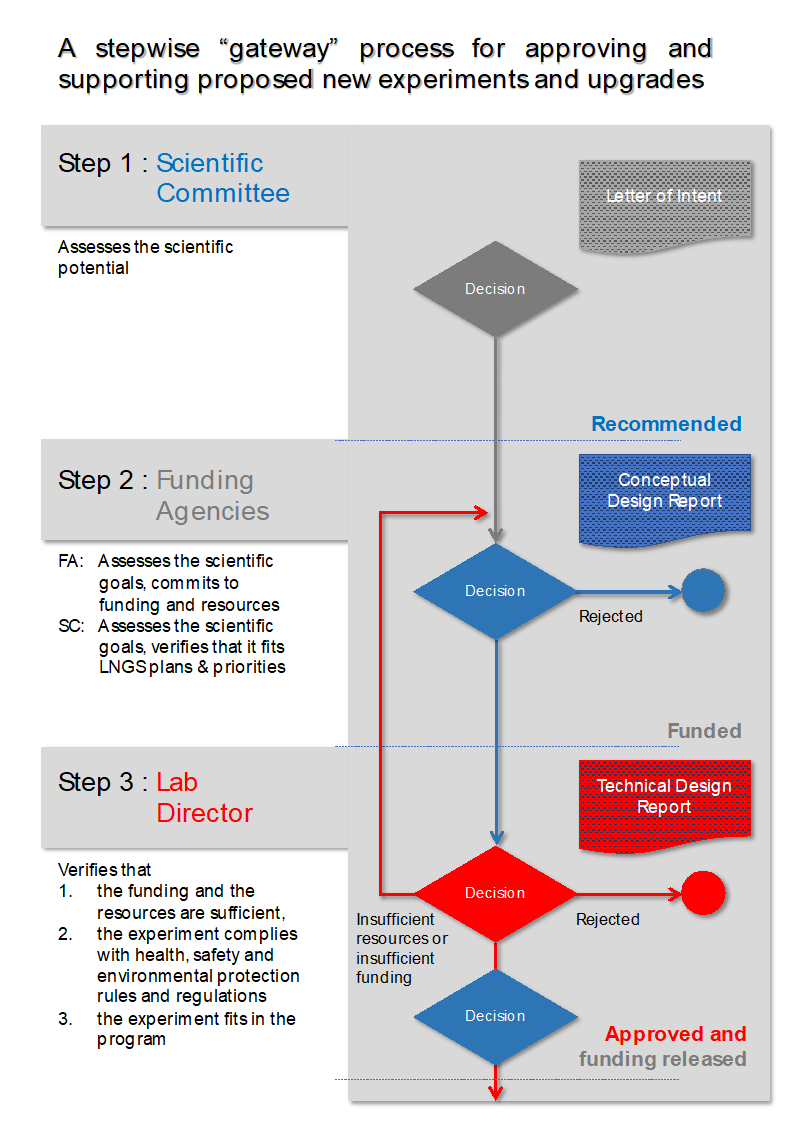