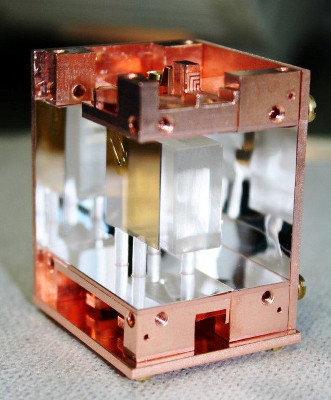 Planets, stars, and galaxies form only the visible portion of the matter in the universe. Greater by far is the share accounted for by invisible "dark matter". Scientists have searched for the particles of dark matter in numerous experiments so far, without a definitive answer on its nature.

With the CRESST experiment, the search radius can be considerably expanded: The CRESST detectors are being overhauled and are able to detect particles whose mass lies below the current measurement range. As a consequence, the chance of tracking dark matter down goes up.

Theoretical models and astrophysical observations leave hardly any doubt that dark matter exists: Its share is five times more than all visible material.

"So far a likely candidate for the dark matter particle was thought to be a heavy particle, the so-called WIMP," explains Federica Petricca, a researcher at the Max Planck Institute for Physics and spokesperson of the CRESST experiment. “Most current experiments therefore probe a measurement range between 10 and 1000 GeV/c2 (gigaelectronvolt/speed of light2)”.

However, recently various new theoretical models have been developed with the potential of solving long-standing problems, like the difference between the simulated and the observed dark matter profile in galaxies. Several of theses models hint towards dark matter candidates below the mass of the traditional WIMP mass.

Now CRESST has achieved an important step toward tracking down these potential "lightweights." In a long-term experiment with one detector, the researchers achieved an energy threshold of 307 eV. “With that, this detector is best suited for measurements between 0.5 and 4 GeV/c2, improving its sensitivity by 100 times,” explains Paolo Gorla from Laboratori Nazionali del Gran Sasso, Italian responsible of the project. “We now can detect particles that are considerably lighter than WIMPs.”

The next measurement cycle of CRESST is expected to begin at the end of 2015 and last for one to two years. On the basis of the newly gained insights, the scientists will equip the experiment with novel detectors.

“On the one hand, the new detector modules make the measurements more precise, and on the other hand they will allow us to break through into new mass regions: We could then also discover dark matter particles if they are lighter than 0,5 GeV/c2. Thus it also increases the chances of finally explaining what dark matter consists of,” Petricca hopes.

The central part of all CRESST detectors is a crystal of calcium tungstate. When a particle hits one of the three crystal atoms (calcium, tungsten, and oxygen), the detectors simultaneously measure energy and light signals from the collision that deliver information about the nature of the impinging particle.

So that the smallest possible temperature and light signals can be recorded, the detector modules are cooled to near absolute zero (-273.15 degrees C). To eliminate disturbing background events, the CRESST scientists employ – for one thing – materials with little natural radioactivity. In addition, the experiment stands in the world's largest underground laboratory, in the Italian mountain Gran Sasso, and thus is largely shielded from cosmic rays.