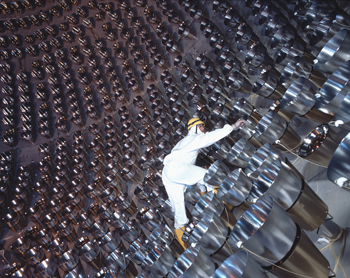 the Borexino experiment at the INFN Gran Sasso National Laboratories publishes today, October 25th, on Nature the compendium of its results on solar neutrinos. With this publication, Borexino crowns a long history of measurements and experimental investigations, which led the experiment, on the one hand, to investigate in detail the mechanism of energy production in the Sun and, on the other, to study in the region of low energy (from a few MeV down to less than 1 MeV) the so-called neutrinos oscillation phenomenon, i.e. the transformation of neutrinos from one type (flavor) into another.

"The results published today-commented Gianpaolo Bellini, of the INFN section of Milan, among the fathers of the experiment-are the pinnacle of a thirty-year history started in the late ' 80, when Borexino was conceived in the context of the scientific debate triggered by the then-unresolved Solar Neutrino Problem. " "The results have gone far beyond even the most optimistic initial predictions," Bellini concludes.

Immersed in the cosmic silence of the underground Gran Sasso Laboratories, from the moment of the data taking start-up, in May 2007, Borexino has been so radiopure that it conquered straightaway a unique and unmatched position within the many existing low background experiments. This peculiarity is the basis of the multiple results accumulated in more than a decade of operation, which go far beyond the initially set objectives, when the experiment was devised. In fact, designed to measure only the flow of neutrinos from 7Be (beryllium 7) among those produced along the proton-proton chain (pp chain, i.e. the sequence of nuclear reactions in the solar nucleus initiated by the fusion of two protons), Borexino has gradually widened its experimental sensitivity, to cover the entire range of neutrinos from the whole sequence.
The unique characteristics of the measures carried out by Borexino, namely the real-time and low-threshold spectroscopic detection of the neutrino flux from the Sun, are all reported in the publication of Nature, with in addition a novelty: in this last result, the different neutrino components were measured simultaneously, and not separately as it happened for the previous analyses, and with considerably greater precisions. The precise and concurrent measurement in a single experiment of the neutrinos fluxes pp (7Be, pep and 8B - boron 8), as well as the limit on the minuscule flow of higher energy neutrinos (hep), altogether coming from the pp chain, allows Borexino to depict with absolute clarity on the experimental side the framework of the operation of our star, putting a definitive end to the secular question about the mechanism that makes it shine for the billions of years of its life.
At the same time, through the comparison of these experimental data of very high quality and accuracy with the forecasts of the Standard Solar Model, Borexino demonstrates incontrovertibly the existence in the low energy region of the oscillation between neutrinos of different flavor by the MSW (Mikheyev-Smirnov-Wolfenstein) effect. In particular, Borexino emphasizes in a completely autonomous way, using only its own data and without having to resort to results of other experiments, the peculiar transition between the two regimes of "vacuum" and "matter", that represents the signature of the MSW effect.
"With the simultaneous and high precision measurement of the fluxes of solar neutrinos from the pp-chain by the same detector-explains Gioacchino Ranucci, researcher Infn Co-spokesperson of the experiment-Borexino is the only detector that alone succeeds at the same time to shed full light on what supplies the engine of the Sun (and therefore the stars) and on the phenomenon of oscillation of neutrinos ".

"With the measures of Borexino-underlines Marco Pallavicini, researcher Infn Co-spokesperson of Borexino-the hypothesis of the functioning of the Sun through the nuclear reactions of the pp chain, suggested in the 30's, finds its definitive experimental consecration".

Borexino, stemmed from the intense cooperation among Italy, Germany, France, Poland, The United States and Russia, has been built exploiting cutting-edge techniques internationally recognized of absolute and unmatched excellence, especially in the field of materials radiopurity and low background.