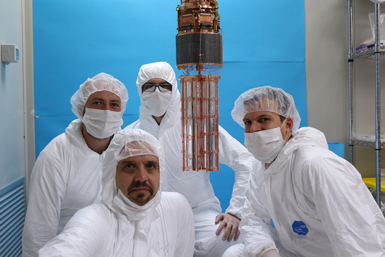 Approximately one year after the start of the data taking, which began in March 2017, scientists from the CUPID-0 collaboration have achieved a new limit for the neutrinoless  double beta decay in a selenium isotope. The new limit is about ten times higher than the previous one.

CUPID-0 is testing scintillating calorimeters based on zinc selenide crystals, developed thanks to the funding of the European Research Council (ERC, Advanced Grant) of the LUCIFER project (Low-background Underground Cryogenic Installation for Elusive Rates), won in 2009 by Fernando Ferroni , current president of the INFN. This technology will then be used in the future larger project,  CUPID, a  third-generation experiment to be built at LNGS in the next decade.

The aim of CUPID-0 is to study the neutrino-less double beta decay, a very rare phenomenon that, if revealed, would imply that neutrino and antineutrino are Majorana particles, i.e. that particle and antiparticle are the same.

"Trying to prove Majorana's hypothesis on the ultimate nature of the  neutrino, that perhaps could help us to understand the mystery of the disappearance of antimatter,  is an extraordinary challenge. CUPID-0 opens up a realistic perspective for a future experiment that can have a chance of success ", emphasizes Fernando Ferroni, president of INFN.

"The great effort of the collaboration started in 2010 with the European  LUCIFER grant and today it is amply repaid by these scientific results. I therefore thank all the colleagues who have contributed to  this experiment over the last years and the LNGS for the continuous and outstanding support ", comments Spokesperson Stefano Pirro (LNGS).

From LUCIFER TO CUPID
The CUPID project begun with the aim of developing an innovative bolometric detector able to work  in extreme radiopure conditions, using the CUORE infrastructure. CUPID-0 is the first prototype that, in view of the future CUPID, is testing scintillating calorimeters based on zinc selenide crystals.
Built between 2015 and 2016 at the Gran Sasso National Laboratories, CUPID-0 started collecting data in March 2017 showing a continuous improvement of the experimental performances. CUPID-0 is the first experiment for the research for neutrinoless double beta decay, realized with isotopically enriched  scintillating bolometers, able to reach a sensitivity comparable to that of the current experiments. The experiment allows to measure both the heat and the light inside the crystal. By combining these two independent measurements, it is possible to identify and distinguish alpha decays from beta decays with very high precision.
Several different techniques are presently under development  to identify the most promising candidate  for a new generation experiment. Another scintillating crystal, lithium molybdate, studied for the first time within the LUCIFER collaboration, has been used to create a second prototype, which will start taking data in the Modane underground laboratories in France by this summer. INFN and the CUPID-0 collaboration have a strong involvement  also within this last project.

CONTACTS
Spokesperson CUPID Experiment| Stefano PIRRO
This email address is being protected from spambots. You need JavaScript enabled to view it.