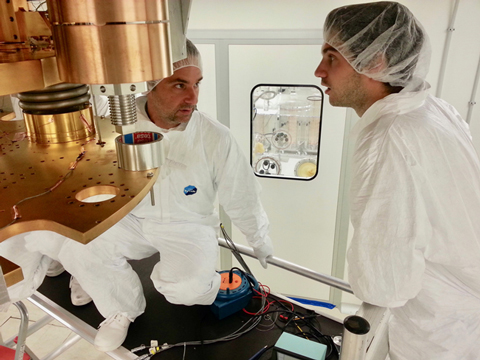 “It is an important award and a big responsibility as well - claims the new spokesperson – in the next years we have to take advantage of our extraordinary experiment’s potentialities and achieve its scientific program, exploiting as much information as possible from the huge amount of data we are collecting”. Carlo Bucci take thus over from Oliviero Cremonesi, recently appointed president of Commissione Scientifica Nazionale 2 for astroparticle physics of INFN.

Carlo Bucci graduated in physics at the University of Milan in 1992, in the team led by prof. Ettore Fiorini. After two years spent at Max-Planck-Institut für Physik of Munich, in 1995 he moved to Gran Sasso National Laboratory. His scientific activity is mainly focused to the search of neutrinoless double beta decay –contributing to MiDBD, Cuoricino and CUORE projects -- and to the search of WIMPS as Dark Matter constituents with the experiment CRESST. The two research branches share the employment of bolometric detectors. In the field of the experiments in which he is involved, his experimental activity is mainly devoted to the development of innovative bolometer detectors and to cryogenics. In 2012 he is designated technical coordinator of CUORE, role carried out until the successfully start of the experiment and the first publication of data. As from 2012 Carlo Bucci becomes Italian responsible of CUORE and, after the starting of the experiment, he’s appointed responsible of the “Detector Operation Board”, leading the scientists’ team in the collecting and optimization of experimental data.

The detection of this process would allow to determine the neutrino mass as well as to prove their potential nature of Majorana particles, thus proving a possible predominance of matter over antimatter.

The experiment consists in 988 cubic crystals made of a natural composite highly purified, tellurium dioxide, arranged in 19 vertical copper structures, called towers. An interaction or a decay inside a crystal implicates an emission of energy, and therefore a slight increase of the temperature of the crystal itself which can be converted in electric signal. At room temperature it is not possible to observe this small change, but at cryogenics temperatures instead it is. CUORE therefore works at cryogenics temperatures: the over 740 kg of crystals, in addition to other 4 tons of copper pieces and lead shields, are cooled down to about a few thousandths of a degree above absolute zero (-273.14 °C). A peculiarity of this technique (called bolometric) is that crystals acts both as source of the decay and detector of the decay itself.