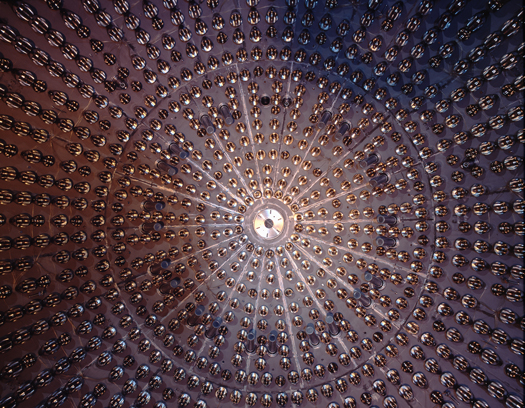 The EPS European Physical Society has awarded the prestigious "Giuseppe and Vanna Cocconi Prize 2021" to the scientific collaboration Borexino.

This important international recognition, which was established in 2011 and is awarded every two years for exceptional contributions to astroparticle physics and cosmology, went to the Borexino experiment of the Gran Sasso National Laboratories (LNGS) of the National Institute of Nuclear Physics (INFN) "for their ground-breaking observation of solar neutrinos from the pp and CNO chains that provided unique and comprehensive tests of the Sun as a nuclear fusion engine”, as stated in the motivation of the award.

"The results we obtained with Borexino went well beyond the most optimistic initial predictions", comments Gianpaolo Bellini, scientist emeritus of INFN and professor emeritus of the University of Milan, one of the founding fathers of the experiment, and who led it for 22 years "The Cocconi prize awarded to us by EPS is a recognition of a more than thirty year of work, beginning in the late 1980s, when the experiment was conceived in the context of the scientific debate triggered by the then unsolved solar neutrino problem, and by the need to study solar neutrinos from very low energies ".

This award attests to the great success of the intense scientific activity and technological development of the Borexino Collaboration, which took place over three decades. Immersed in the cosmic silence of the Gran Sasso underground laboratories, since the beginning of its data production, on May 15, 2007, Borexino has shown that it possesses a level of radiopurity so high to make it stand out in its field of research. Thanks to this feature, achieved with the development of innovative methods for radio purification, as well as with a long and accurate work of selection and development of all its components during the construction phase, Borexino, stemming from the strong cooperation among Italy, Germany, France, Poland, the United States and Russia, managed to obtain the results highlighted in the motivation for the Cocconi prize: the first spectroscopic observation of solar neutrinos coming from the proton-proton fusion chain, and the first, experimental detection of neutrinos from the CNO fusion cycle. 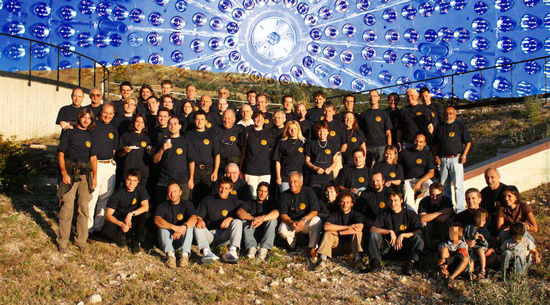 "With the comprehensive measurement of the neutrinos coming from the sequence of reactions of the pp chain and the CNO cycle that take place in the solar core, Borexino was able to study and thoroughly reveal the basic mechanisms of the "engine" of the Sun, and therefore of the stars ", explains Gioacchino Ranucci, INFN researcher of the Milan Section and co-spokesperson of the experiment.

"Thanks to the measurements made by Borexino, the nuclear hypothesis for the functioning of the Sun and stars which was proposed in the 30’s has found its definitive experimental confirmation, together with the confirmation that neutrino oscillation in solar matter are different than in the vacuum”, underlines Marco Pallavicini, researcher of the INFN section and professor of the University of Genoa, co-spokesperson of Borexino.

The award is a source of great satisfaction to Gran Sasso National Laboratory as well.

“The award given by the European Physical Society to Borexino Collaboration is among the most prestigious in the field of astroparticle physics, all over the world.”- declares Ezio Previtali, Director of the Laboratory – “The study carried out by the experiment during its long “data taking” have clarified many aspects of Solar and neutrino physics still unknown.

I wish to congratulate the Borexino collaboration for the fundamental contribution given to the study of particle physics. I also wish to highlight the professionalism of the whole staff of Gran Sasso National Laboratory for the excellent contribution provided to the experiment over a period of almost 20 years.” concludes Previtali.

The observation of solar neutrinos, carried out by Borexino in a unique and complete way, is a great satisfaction for our laboratory as well as for our territory, which has seen the commitment of researchers and technicians, many of which coming from our region, wih the support of specialized local firms”, observes Aldo Ianni, INFN research executive, member of Borexino collaboration since its beginning.

“The results of Borexino”, adds Nicola Rossi, INFN researcher and local responsible for the experiment, “are significant both from a scientific, as a progress in knowledge, and a technological point of view. Everything has been possible thanks to a constantly updated research and development program, suggested by in-depth feasibility studies and operational interventions on the experimental apparatus continuously from 2007 till now.”

The award ceremony will take place on July 26th, during the EPS-HEP high energy physics conference organized by the European Physical Society, which will be held online this year.

Solar models suggest that 99% of the nuclear energy released by the Sun comes from the proton-proton chain (pp), namely from the fusion of four hydrogen nuclei into helium. The only direct evidence of this process is the observation of the neutrinos produced in the chain.

Solar neutrinos were first revealed in the United States in 1968 by the Homestake experiment, sensitive to neutrinos emitted above an energy threshold of 814 keV (electronvolts, eVs, are the unit of energy in subatomic physics). The study of these particles, which is crucial to the understanding of the functioning of our Sun, has continued incessantly over the years. In particular, further and fundamental progress has been made thanks to the Gallex/GNO experiment, with an energy threshold of 230 keV, carried out at LNGS between 1991 and 2003. However, both of these experiments were unable to measure the spectra of individual reactions and thus distinguish the different components of solar neutrinos.

Observation of solar neutrinos contributed to the discovery of neutrino oscillations, thanks to the results of the SNO experiments in Canada and Super-Kamiokande in Japan, which are sensitive above 4,000 keV.

Borexino is the only experiment that has been able to measure the full energy spectrum of solar neutrinos above 190 keV, and to identify the energy of each neutrino event. Already in 2014, Borexino had reported the first complete measurement of the neutrino fluxes produced in the pp chain, which was further improved in 2018 thanks to over 2000 days of data taking. Borexino has provided an estimate of the total power generated by nuclear reactions occurring in the Sun's core with an uncertainty of 10%, in full agreement with the value estimated from the measured solar luminosity. This constitutes an unprecedented demonstration that nuclear fusion of hydrogen is the engine generating the energy of the Sun.

1% of the Sun's energy production occurs through the CNO cycle, in which the synthesis of helium is catalyzed by Carbon-Nitrogen-Oxygen reactions. While the CNO cycle provides an almost negligible contribution to the energy of the Sun, stellar models predict that this cycle is the dominant one for stars having a mass exceeding the Sun mass by at least 30%, which make up about 10% of the stars in our galaxy. Before the Borexino measure, published in Nature at the end of 2020, no experimental evidence was available to support this theory on which the current understanding of our universe is based. It took five years of effort to understand and reduce the internal impurities of the detector, before being able to recognize the neutrinos produced in the CNO cycle, which are about 100 times less abundant than the neutrinos of the pp chain.

The observation of the pp chain and CNO neutrinos also provides valuable information to address the problem of the chemical composition of the Sun (or "metallicity": the density of elements other than hydrogen and helium), which remains unsolved since 2005, and for neutrino oscillation physics.

This award represents the recognition of a work that has lasted more than 30 years and comes a few weeks before the end of the experiment itself.