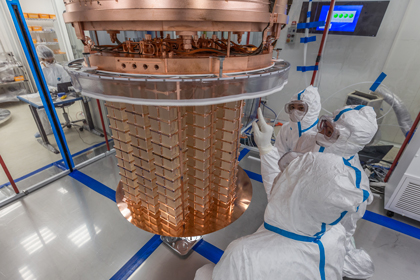 CUORE expected to reveal – or rule out – a possible explanation for why the universe favors matter over antimatter.

The first glimpse of data from the full array of a deeply chilled particle detector operating beneath a mountain in Italy sets the most precise limits yet on where scientists might find a theorized process to help explain why there is more matter than antimatter in the universe. This new result, submitted today to the journal Physical Review Letters, is based on two months of data collected from the full detector of the CUORE (Cryogenic Underground Observatory for Rare Events) experiment at the Italian National Institute for Nuclear Physics’ (INFN’s) Gran Sasso National Laboratories (LNGS) in Italy. CUORE means “heart” in Italian.

CUORE is considered one of the most promising efforts to determine whether tiny elementary particles called neutrinos, which interact only rarely with matter, are “Majorana particles” – identical to their own antiparticles. Most other particles are known to have antiparticles that have the same mass but a different charge, for example. CUORE could also help us home in on the exact masses of the three types, or “flavors,” of neutrinos – neutrinos have the unusual ability to morph into different forms.

“This is the first preview of what an instrument this size is able to do,” said Oliviero Cremonesi, a senior faculty scientist at INFN and spokesperson for the CUORE collaboration. Already, the full detector array’s sensitivity has exceeded the precision of the measurements reported in April 2015 after a successful two-year test run that enlisted one detector tower. Over the next five years CUORE will collect about 100 times more data.

Yury Kolomensky, a senior faculty scientist in the Nuclear Science Division at Lawrence Berkeley National Laboratory (Berkeley Lab) and U.S. spokesperson for the CUORE collaboration, said, “The detector is working exceptionally well and these two months of data are enough to exceed the previous limits.” Kolomensky is also a professor in the UC Berkeley Physics Department.

The new data provide a narrow range in which scientists might expect to see any indication of the particle process it is designed to find, known as neutrinoless double beta decay.

“CUORE is, in essence, one of the world’s most sensitive thermometers,” said Carlo Bucci, technical coordinator of the experiment and Italian spokesperson for the CUORE collaboration. Its detectors, formed by 19 copper-framed “towers” that each house a matrix of 52 cube-shaped, highly purified tellurium dioxide crystals, are suspended within the innermost chamber of six nested tanks.

Cooled by the most powerful refrigerator of its kind, the tanks subject the detector to the coldest known temperature recorded in a cubic meter volume in the entire universe: minus 459 degrees Fahrenheit (10 milliKelvin).

The detector array was designed and assembled over a 10-year period. It is shielded from many outside particles, such as cosmic rays that constantly bombard the Earth, by the 1,400 meters of rock above it, and by thick lead shielding that includes a radiation-depleted form of lead rescued from an ancient Roman shipwreck. Other detector materials were also prepared in ultrapure conditions, and the detectors were assembled in nitrogen-filled, sealed glove boxes to prevent contamination from regular air.

“Designing, building, and operating CUORE has been a long journey and a fantastic achievement,” said Ettore Fiorini, an Italian physicist who developed the concept of CUORE’s heat-sensitive detectors (tellurium dioxide bolometers), and the spokesperson-emeritus of the CUORE collaboration. “Employing thermal detectors to study neutrinos took several decades and brought to the development of technologies that can now be applied in many fields of research.”

Together weighing over 1,600 pounds, CUORE’s matrix of roughly fist-sized crystals is extremely sensitive to particle processes, especially at this extreme temperature. Associated instruments can precisely measure ever-slight temperature changes in the crystals resulting from these processes. The measurements carry the telltale signature of specific types of particle interactions or particle decays – a spontaneous process by which a particle or particles transform into other particles.

In double beta decay, which has been observed in previous experiments, two neutrons in the atomic nucleus of a radioactive element become two protons. Also, two electrons are emitted, along with two other particles called antineutrinos.

Neutrinoless double beta decay, meanwhile – the specific process that CUORE is designed to find or to rule out – would not produce any antineutrinos. This would mean that neutrinos are their own antiparticles. During this decay process the two antineutrino particles would effectively wipe each other out, leaving no trace in the CUORE detector. Evidence for this type of decay process would also help scientists explain neutrinos’ role in the imbalance of matter vs. antimatter in our universe.

Neutrinoless double beta decay is expected to be exceedingly rare, occurring at most (if at all) once every 100 septillion (1 followed by 26 zeros) years in a given atom’s nucleus. The large volume of detector crystals is intended to greatly increase the likelihood of recording such an event during the lifetime of the experiment.

There is growing competition from new and planned experiments to resolve whether this process exists using a variety of search techniques, and Kolomensky noted, “The competition always helps. It drives progress, and also we can verify each other’s results, and help each other with materials screening and data analysis techniques.”

Lindley Winslow of the Massachusetts Institute of Technology, who coordinated the analysis of the CUORE data, said, “We are tantalizing close to completely unexplored territory and there is great possibility for discovery. It is an exciting time to be on the experiment.”

CUORE is supported jointly by the Italian National Institute for Nuclear Physics Istituto Nazionale di Fisica Nucleare (INFN) in Italy, and the U.S. Department of Energy’s Office of Nuclear Physics, the National Science Foundation, and the Alfred P. Sloan Foundation in the U.S. The CORE collaboration includes about 150 scientists from Italy, U.S., China, France, and Spain, and is based in the underground Italian facility called INFN Gran Sasso National Laboratories (LNGS) of the INFN. Berkeley Lab leads the U.S. nuclear physics effort for the international CUORE collaboration.

Images:
Images are available at this link: https://cuore.lngs.infn.it/en/images