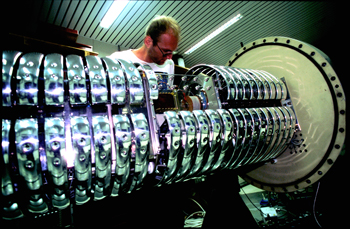 A rare nuclear reaction that occurs in red giants has been observed for the first time at the Gran Sasso National Laboratory in Italy. This result was achieved by the LUNA experiment, the world's only accelerator facility running deep underground.

The LUNA experiment at the INFN Gran Sasso National Laboratory in Italy has observed a rare nuclear reaction that occurs in giant red stars, a type of star in which our sun will also evolve. This is the first direct observation of sodium production in these stars, one of the nuclear reactions that is fundamental for the formation of the elements that make up the universe. The study has been published in Physical Review Letters.

LUNA (Laboratory for Underground Nuclear Astrophysics) is a compact linear accelerator. It is the only one in the world installed in an underground facility, shielded against cosmic rays. The experiment aims to study the nuclear reactions that take place inside stars where, like in an intriguing and amazing cosmic kitchen, the elements that make up matter are formed and then driven out by gigantic explosions and scattered as cosmic dust.

For the first time, this experiment has observed three "resonances" in the neon-sodium cycle responsible for sodium production in red giants and energy generation (the 22Ne(p,g)23Na. In the same way as in acoustics, a "resonance" is a particular condition that makes the reaction inside the star extremely likely. LUNA recreates the energy ranges of nuclear reactions and, with its accelerator, goes back in time to one hundred million years after the Big Bang, to the formation of the first stars and the start of those processes that gave rise to mysteries we still do not fully understand, such as the huge variety in the quantities of the elements in the universe.

"This result is an important piece in the puzzle of the origin of the elements in the universe, which the experiment has been studying for the last 25 years", remarked Paolo Prati, spokesperson for the LUNA experiment. "Stars generate energy and at the same time assemble atoms through a complex system of nuclear reactions. A very small number of these reactions have been studied in the conditions under which they occur inside stars, and a large proportion of those few cases have been observed with this accelerator".

LUNA uses a compact linear accelerator in which hydrogen and helium beams are accelerated and made to collide with a target (in this case, a neon isotope), to produce other particles. Special detectors obtain images of the products of the collisions and identify the reaction to be examined. These extremely rare processes can only be detected in conditions of cosmic silence. The rock surrounding the underground facility at the Gran Sasso National Laboratory shields the experiment against cosmic rays and protects its measurements.

LUNA is an international collaboration involving some 50 Italian, German, Scottish and Hungarian researchers from the National Institute for Nuclear Physics in Italy, the Helmholtz-Zentrum Dresden-Rossendorf in Germany, the MTA-ATOMKI in Hungary and the School of Physics and Astronomy of the University of Edinburgh in the UK.

This email address is being protected from spambots. You need JavaScript enabled to view it., mobile: + 39 3493951491