The aim of the COBRA Experiment (Cadmium Zinc Telluride 0-Neutrino Double-Beta Research Apparatus) is to prove the existence of the neutrinoless double beta decay (0νββ-decay) and to measure its half-life. The COBRA demonstrator at LNGS is used to investigate the experimental issues of operating CdZnTe detectors in low background mode while additional studies are proceeding in surface laboratories. The experiment consists of 64 monolithic, calorimetric detectors in a coplanar grid (CPG) design. The detectors are 1×1×1 cm3 in size and are operated in a 4×4×4 detector array. As a semiconductor material, Cadmium-Zinc-Telluride (CdZnTe) offers the low radioactivity levels and good energy resolution required for the search for 0νββ-decay. Furthermore, CdZnTe contains naturally several double beta decay candidates. The most promising one is 116Cd with a Q-value of 2.8 MeV, which lies above the highest prominent γ-line occurring from natural radioactivity.

The COBRA experiment searches for the neutrinoless double beta decay with CdZnTe semiconductor detectors. This material is commercially available with several suppliers worldwide and allows for the  operation at room temperature. Furthermore, it contains naturally five isotopes which can undergo double beta decay, the most promising ones being 116Cd and 130Te. The approach of using detectors made of semiconductor material offers several advantages. Due to the process of crystal growth the material is intrinsically very clean, which is crucial to reach the ultra-low background level necessary for the search of rare events such as 0νββ -decay. Semiconductor detectors feature an excellent energy resolution in general, although the achievable resolution with CdZnTe is not as good as for Germanium detectors. The good energy resolution is very important to distinguish the neutrinoless double beta decay from the neutrino accompanied decay, which has to be considered as intrinsic background that cannot be eliminated. The principle of "detector = source" is used here, meaning that the detector itself contains the isotopes that can undergo double beta decay. This maximizes the detection efficiency E, as all particles emitted in the decay travel through the detector. An estimation for the sensitivity of an experiment to measure a half-life is given by

Some parameters such as the detector mass M, experimental lifetime t, width of the energy window ∆E = 2 × FWHM at the expected 0νββ-peak and the background index B in the region of interest show only square root dependency, whereas the isotopic abundance a and detection efficiency E contribute linearly. For the search of 0νββ-decay, the Q-value of the decay is important not only because of the scaling of the half-life with Q−5, but also with regard to the highest naturally occurring γ-line at 2614 keV originating from 208Tl as part of the ubiquitous 232Th-decay chain. Highly energetic γ-radiation is hard to shield and therefore a source of background. The Q-value of 116Cd is 2814 keV, hence, well above this line while the Q-value of 130Te at 2527 keV lies just between the full energy peak of 208Tl and the corresponding Compton continuum and will encounter therefore only a small fraction of background coming from multiple scattered photons. This shows that natural radioactivity will hardly effect the region of interest for the COBRA experiment with focus on the isotopes 116Cd and 130Te. 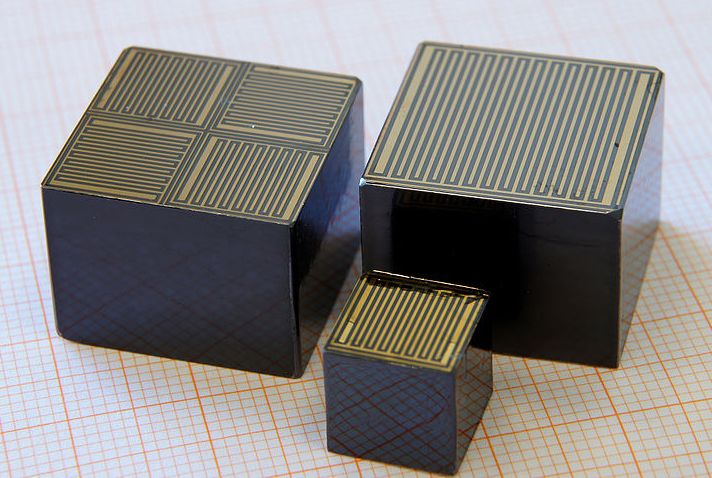 Figure 1: Picture of the different detector types used for the COBRA experiment. The small detector has a size of 1×1×1 cm3 and is currently in use for the COBRA demonstrator. The larger crystals of size 2×2×1.5 cm3 are foreseen to be used in a future large scale setup.

The remaining background arises from α- and β-radiation from contaminations within the setting, neutrons and neutron induced reactions and particles from cosmic rays. The charge carriers in CdZnTe feature a rather low mobility lifetime product, especially the holes. That is why the coplanar grid technology is used to compensate for the poor charge transport properties. In this technique, two anodes are used which are comb-shaped interleaved, as shown in Figure 1, while the cathode is worked planar on the other side. Between cathode and anode a negative bias voltage on the order of -1 kV is applied. One anode, called the collecting anode (CA) is on ground potential while the other one, the non-collection anode (NCA), is slightly negative. Hence, electrons drifting through the bulk of the detector will be collected at the CA held at slightly lower potential than the NCA. By subtracting the NCA from the CA signal, one yields a signal which is nearly independent of the interaction depth, as only the electron movement in the anode region contributes. Furthermore, the CPG anode approach enables the reconstruction of the interaction depth z, which is the position where the energy deposition happened between anode (z = 0) and cathode (z = 1). This offers great possibilities in background reduction, as events from the surface, for example contaminations on the cathode, can be eliminated by a cut on the interaction depth. The search for the extremely rare neutrinoless double beta decay requires an ultra-low back- ground environment. That is why the COBRA experiment is situated at the Laboratori Nazionali del Gran Sasso (LNGS), which provides 1400 m of rock coverage to shield against cosmic particles. Further shielding layers surround the experimental setup as can be seen in Figure 2. Outermost is a shielding against neutrons, made of 7 cm borated polyethylene followed by welded steel plates with a special cable feed-through to shield against electromagnetic interferences. The inner part of the setup is enclosed in an air-tight sealing to prevent dust and radon to come close to the detectors. Then follows a lead castle made of normal and special low level activity lead (2.3 tons total weight), before a structure of electrolytic-formed copper holds the detectors. The whole inner setup is permanently flushed with purified evaporated nitrogen under a slight overpressure, again to prevent radon from entering the setup. Currently the COBRA demonstrator takes high quality low background physics data – in total an exposure of 200 kg × days have been accumulated until the beginning of 2015. The data set is being analyzed to understand the different background components and to extract half-life limits on the isotopes of interest in the detector material. Figure 3 illustrates the measured spectrum at the LNGS in a two-dimensional plot of reconstructed interaction depth versus deposited energy. Based on the low-background operation at the LNGS several analytic methods have been developed to identify prominent background features and to improve the understanding of the CPG detectors. The power of the developed methods to identify prominent background features such as lateral surface events (LSE) or multi-site events induced by multiply scattered photons can be seen in Figure 4. The signal of a double beta decay is expected to show single-site character meaning an energy deposition within a single detector in a single spot of the crystal. Hence, all events with multiple interaction points can be vetoed as background in the final 0νββ-analysis. Furthermore, methods of pulse shape analysis (PSA) allow for the discrimination of events near the lateral detector walls and central events due to characteristics in the corresponding pulse shapes. The effect of the different analysis methods are shown in Figure 4 resulting in a background index of less than 1 count/kg/keV/yr in the 116Cd region of interest. To measure the intrinsic two-neutrino spectrum, only a background reduction of less than one order of magnitude has to be achieved. Meanwhile, conceptual planning and lab tests for the large scale COBRA experiment are ongoing. The idea is to use larger detectors (see Figure 1) and an electronics readout system based on integrated circuits in combination with a more sophisticated shielding system and advanced pulse shape analysis techniques.
Spokesperson
This email address is being protected from spambots. You need JavaScript enabled to view it. (TU Dresden)