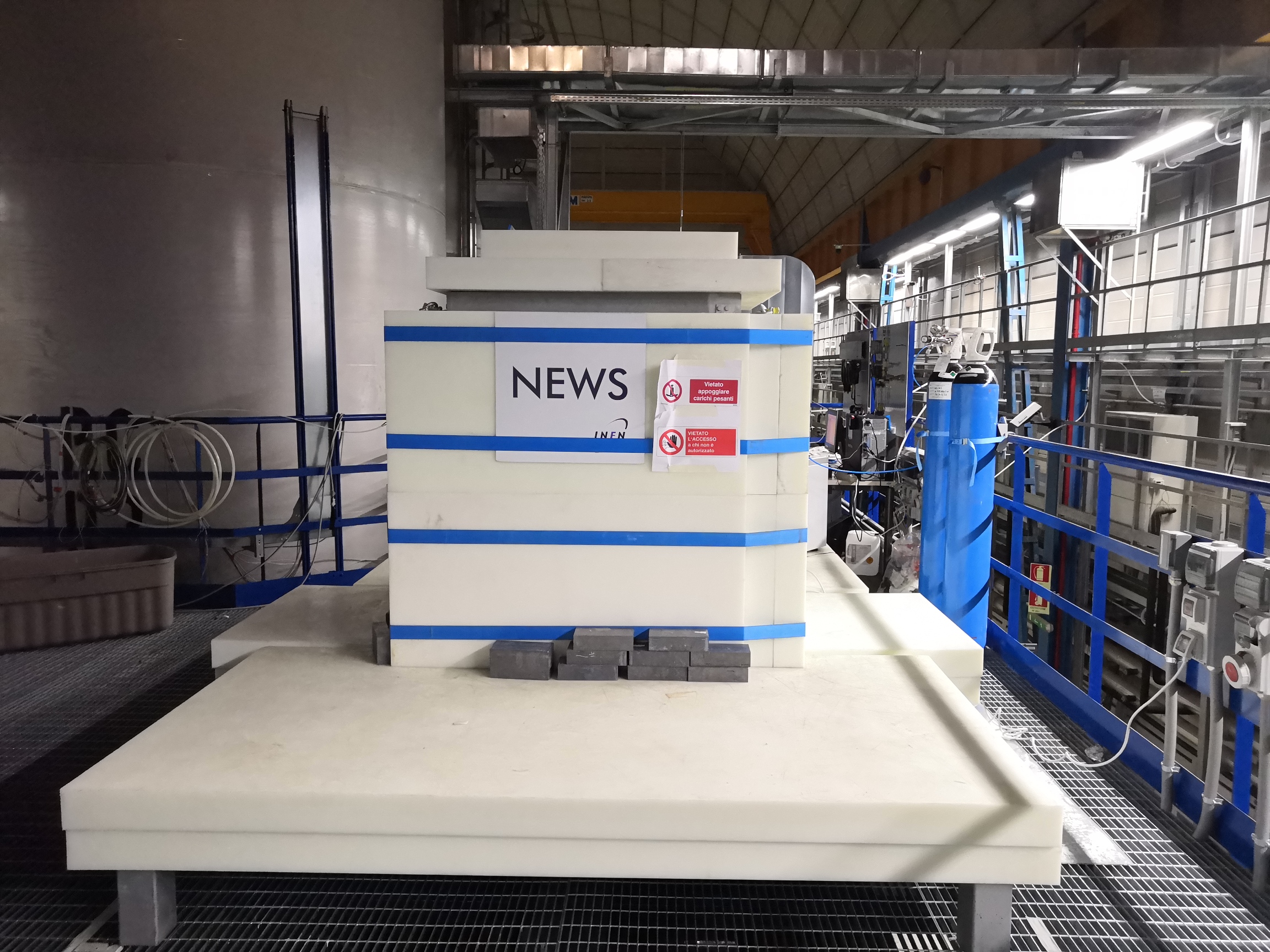 Nowadays there is compelling evidence for the existence of dark matter in the Universe. A consensus has been reached on the need for a directional sensitive detector to confirm, with a complementary approach, the candidates possibly found in conventional searches and to finally extend their sensitivity beyond the limit of neutrino-induced background. The NEWSdm (Nuclear Emulsion for WIMP Search with directional measurement) experiment is designed on purpose to use nuclear emulsions and measure the direction of WIMP-induced nuclear recoils. The detector uses nuclear emulsion films with nanometric grains allowing to detect sub-micrometric tracks left by low energy ions in such emulsion films. Innovative analysis technologies with fully automated optical microscopes have made it possible to achieve the track reconstruction for path lengths down to less than hundred nanometres and there are good prospects to further extend this limit. The detector concept foresees the use of a bulk of nuclear emulsion films surrounded by a shield from environmental radioactivity, to be placed on an equatorial telescope in order to cancel out the effect of the Earth rotation, thus keeping the detector at a fixed orientation toward the expected direction of galactic WIMPs. The preparation of a 10 kg year exposure can be considered as the first step towards the neutrino floor limit.

Compelling evidence for an abundant, non-baryonic, non-luminous (dark) matter component was collected in the last decades. Yet, the nature of the dark matter (DM) remains totally unknown, and the quest for an answer ranks as one of the main issues of the experimental particle physics, astrophysics and cosmology. Weakly Interacting Massive Particles (WIMPs) are creditable, theoretically appealing DM candidates. If these massive relics of the early universe do exist, they are expected to be gravitationally bound to the baryonic visible matter. A direct search for WIMPs in the mass range from a few GeV to a few TeV could be based on the detection of nuclear recoils induced by WIMP elastic scattering.

The motion of the Solar System through the galaxy can create an apparent wind of dark matter particles, blowing opposite to the direction of the Sun’s motion toward the Cygnus constellation. The key points for the design of an experiment searching for DM with a directional approach are the expected event rate and the expected angular and energy distribution of recoiling nuclei. The expected event rate does not exceed 1 event/kg/year. Such extremely low rates require strong background suppression. The WIMPs mean velocity inside our galaxy is a few hundred kilometers per second at the location of our Solar System. For these velocities, WIMPs interact with ordinary matter mainly via elastic scattering on nuclei. With expected WIMP masses in the range from 10 GeV to 10 TeV, typical nuclear recoil energies are of the order of 1 – 100 keV. The expected nuclear recoil energy spectrum decreases almost exponentially with energy.

To exploit directionality, the required spatial accuracy is in the sub-mm domain for gaseous detectors and in the submicronic range for solid state detectors. In the first case the low event rate sets the requirement of very large volumes while in the second case an extremely high resolution is required to cope with the very short range of the recoil nuclei.

The Nuclear Emulsions for WIMP Search with directional measurement (NEWSdm) project aims at the direct detection of dark matter candidates by measuring the direction of WIMP-induced nuclear recoils in the nuclear emulsions. For this challenge, the detector exploits new generation nuclear emulsions with nanometric grains. An R&D conducted by the Nagoya University in collaboration with the Fujifilm Company has established the production of films with nanometric grains for an ultra-high spatial resolution. The emulsion production has been established at the LNGS underground facility located in Hall F, with a machine which is unique in Europe.

Dedicated R&D resulted in the development of new fully automated scanning systems capable of detecting tracks on the nanometric scale, with unprecedented optical technologies overcoming the diffraction limit of conventional systems. These systems are based on the use of the localized surface plasmon resonance effect. The detector will be placed on an equatorial telescope to keep its orientation toward the Cygnus constellation fixed.

The Letter of Intent was submitted to the Gran Sasso Scientific Committee in 2016 and it is available at the following link https://arxiv.org/abs/1604.04199.

Spokesperson
This email address is being protected from spambots. You need JavaScript enabled to view it. (Federico II University of Napoli and INFN)

The NEWSdm Collaboration includes about 80 scientists from 14 institutes of 5 countries: Italy, Japan, Russia, South Korea and Turkey. The Institutes are: