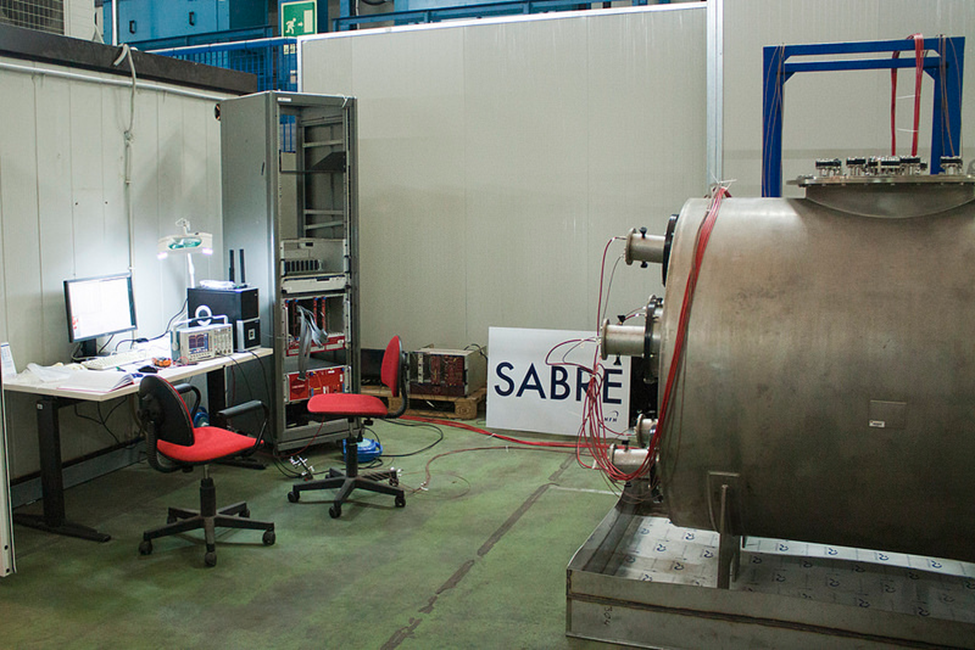 SABRE (Sodium Iodide with Active Background Rejection Experiment) aims at the direct detection of dark matter particles via their scattering off nuclei. A fundamental model-independent signature for dark matter particles interacting on a ground-based detector is the annual modulation of the expected interaction rate. Such modulation is due to the change of the Earth’s velocity relative to the galactic halo reference frame, with maximum interaction rate around June 2nd. SABRE aims to detect the annual modulation by an array of high radio-purity NaI(Tl) crystals deployed in a liquid scintillator, which works as an active anti-coincidence veto. The crystal radio-purity is a fundamental feature in SABRE. Therefore, a proof-of-principle measurement is planned to characterize the first 5 kg high purity crystals produced by the Collaboration. In addition, SABRE scientific program includes the deployment of two similar detectors: one in the North hemisphere at LNGS, in Italy, and one in the South hemisphere at SUPL, in Australia. This double measurement will improve disentangling any subtle effect due to cosmic muons, which have an opposite seasonal modulation in the two hemispheres.

The heart of the SABRE detector is  high radio-purity Thallium-doped Sodium-Iodide (NaI(Tl)) scintillating crystals. Each collision between a dark matter particle and a nucleus releases a  small amount of energy  (<100 keV) that is converted into light. The amount of light is measured by two high quantum efficiency photomultiplier tubes (PMTs) directly coupled to  each crystal. Each crystal is packaged along with two PMTs inside a high-purity light and air-tight copper enclosure. The NaI(Tl) detector module is operated inside a stainless steel vessel filled with liquid scintillator that acts as active shielding. Unlike gammas and neutrons background events, dark matter events are localized inside the crystals. Therefore, the liquid scintillator can veto a large fraction of backgrounds coming from the intrinsic radioactive isotopes and residual contamination of the detector set-up materials. A passive shielding made of lead, polyethylene and water, installed outside the scintillator vessel, provides a further suppression of the background coming from the experimental hall.
The development of SABRE is expected to follow a two phase program. The first phase (SABRE Proof-of-Principle or PoP) aims to develop and test radio-pure NaI(Tl) crystals in an active veto detector at LNGS. This phase will use a 5 kg crystal made following a specific protocol to reduce intrinsic background and external contaminations. The crystal will be operated inside 1.5 tons of liquid scintillator. When the PoP has proven that the radio-purity of the crystal matches the SABRE goal, the Collaboration will move to the second phase. The second phase foresees an array of low background crystal detectors to perform a dark matter search. The total mass of NaI(Tl) crystals is expected to be of the order of 50 kg. To strengthen the reliability of the result against possible seasonal systematic effects, we currently plan twin full-scale experiments, one in the northern hemisphere at LNGS, in Italy, and one in the southern hemisphere inside the Stawell gold mine in Victoria, Australia, which is being converted into an underground laboratory (SUPL).

Spokesperson
This email address is being protected from spambots. You need JavaScript enabled to view it. (Princeton University)