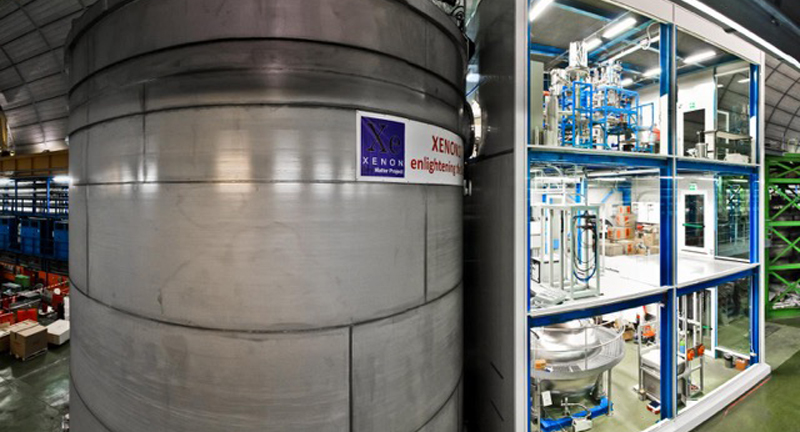 Among the various experimental strategies to directly detect dark matter particles, detectors using liquid xenon (LXe), such as XENON100 and LUX, have demonstrated the highest sensitivities over the past years. The XENON100 detector set the most stringent limit, between 2010 and fall 2013, on the spin-independent WIMP-nucleon elastic scattering cross section for WIMP masses above 8 GeV/c2, with a minimum at 2 x 10-45 cm2 at 55 GeV/c2 (90% CL) achieved in 2012. In parallel, since 2010, the XENON1T project started. It is the largest dual phase Xe-based detector ever realized and, after its approval by all funding agencies in 2011, it has been built in the period 2014 to late 2015 in the Hall B at the Gran Sasso Underground Laboratory (LNGS). The commissioning phase started in early 2016 and by the end of 2016 the physics data taking is expected to start.

Detection techniques
The “heart” of the various XENON detectors is a dual phase Time Projection Chamber (TPC) that contains xenon in liquid phase (LXe) with gaseous phase (GXe) on top, at a temperature of about -95 °C. The TPC is enclosed by two meshes: the Cathode (at negative voltage) on the bottom and the Gate mesh (grounded) on top. This structure contains the LXe active region, called the sensitive volume that represents the volume used to detect the interactions. A particle interacting in LXe produces a prompt scintillation signal (S1) through excitation and recombination of ionization electrons. The electrons that do not recombine are drifted towards the liquid-gas interface where they are extracted into the GXe to produce the secondary scintillation signal (S2). The S2 signal results from the acceleration of the extracted electrons by a high electric field in the low density of the gas: between two collisions with xenon atoms, an electron reaches sufficient energy to excite an atom at the next collision. In this way, each electron generates hundreds of scintillation photons, yielding the proportional, amplified S2 signal. Two PMT arrays, one on top of the TPC inside the GXe and one at its bottom below the cathode, in LXe, are used to detect the scintillation light. From the hit pattern on the top PMTs, the x-y position of the events is determined, while from the time difference between S1 and S2 signals the z coordinate is inferred. Hence a 3D vertex reconstruction is possible. The knowledge of the interaction point allows the selection of events in the inner part of the LXe, the so-called “fiducial volume”, which is the region best shielded from background. 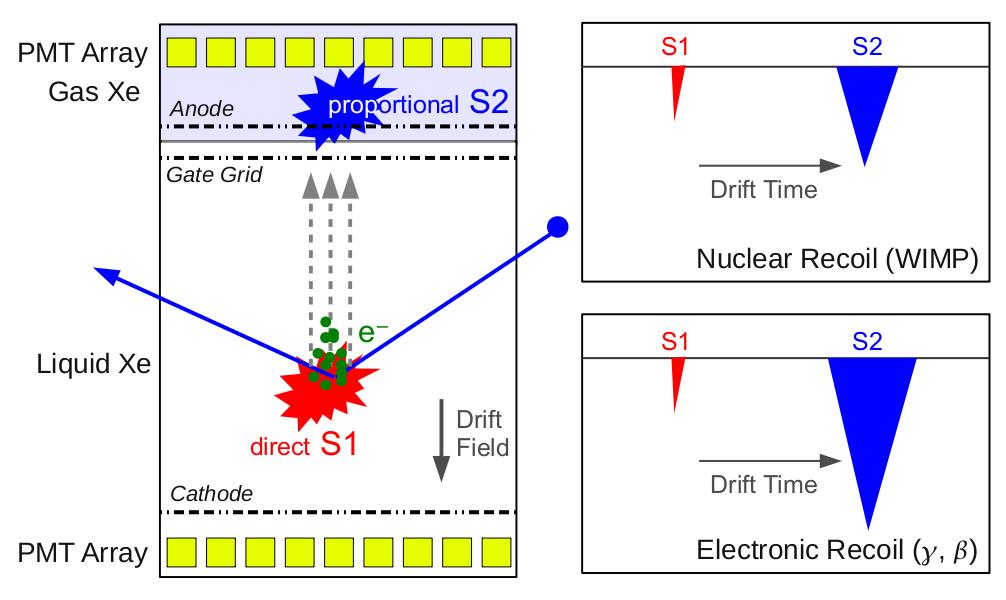 The XENON1T experiment is presently taking calibration data and by the late 2016 the physics data taking is expected.  The goal of the experiment is to lower the current sensitivities on WIMP-nucleon cross section by about two orders of magnitude. The detector contain a total amount of about 3.3 tonnes of LXe in a double vessel vacuum insulated cryostat made of low activity stainless steel (SS). The dimensions of the inner cryostat are chosen to host the XENON1T TPC, while the outer one is increased in order to host also a planned future upgrade of the experiment, XENONnT. XENON1T features various essential support systems. They provide redundant cooling with pulse tube refrigerators to the necessary cryogenic temperatures, ensure safe operation with a xenon storage system that can hold up to 7 tonnes of xenon in liquid or gaseous form, and circulate the xenon through heat exchangers and high-temperature getters to provide the necessary ultrahigh purity. A separate cryogenic distillation column reduces radioactive krypton to less than 1 atom in 15 milliliters of LXe. In XENON1T, the sensitive target consists of about 2 tonnes of LXe, enclosed in a TPC of about 1 m diameter and height, made of 24 polytetrafluoroethylene (PTFE) interlocking panels. To detect the scintillation signals there are 121 PMTs in the bottom array and 127 PMTs in the top one. 74 copper field-shaping rings ensure the uniformity of the electric drift field. The principle of a diving bell ensures fine control of the liquid level inside the TPC. This solution has the additional advantage that the LXe outside the bell can rise above the top PMT array, establishing a layer of LXe all around the TPC. The level of background in XENON1T has to be reduced to about 2 events in the total exposure of 2 tonne-years. The main sources of background are electronic recoils (ER) from radionuclides inside the detector materials and from intrinsic sources, and nuclear recoils (NR) from radiogenic and cosmogenic neutrons. From MC simulations, the ER plus radiogenic NR is about 1 event in the total exposure of 2 tonne-years. In order to reduce the NR from cosmogenic neutrons, the entire XENON1T detector will be hosted inside an active veto, tagging cosmic muons and their cascades, which are a source of background events. The Muon Veto for the XENON1T detector, consisting of a large SS tank that will be filled with ultrapure water, is based on the detection of the Cherenkov light emitted by particles travelling through the water. The light will be detected by 84 PMTs (8" in diameter). The residual muon-induced neutron background in XENON1T is < 0.01 ev/y in a 1 tonne fiducial mass, i.e. negligible. With such a low level of total background, the XENON1T detector will reach sensitivity to WIMP-nucleon cross section of about 1.2 x 10-47 cm2 thus exploring a new area of the parameter space for the dark matter search. In the picture below is shown a comparison between the current experimental limits and the foreseen result from XENON1T. 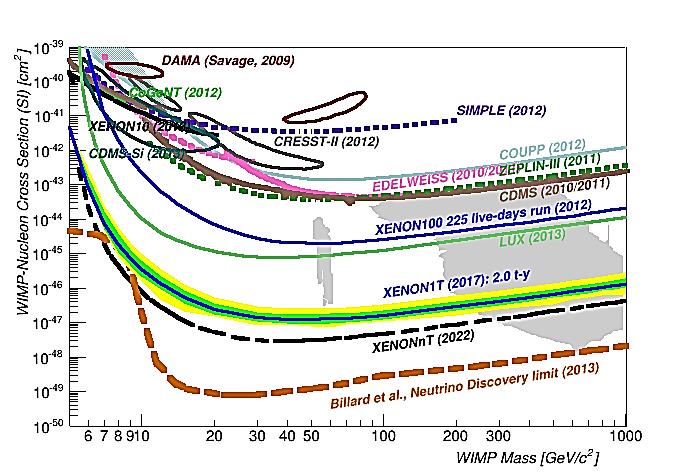 The following pictures show the status of XENON1T construction as of March 2015. More photos are available on the XENON1T official website.

The XENON100 detector uses the same principle of operation and many design features successfully tested in the XENON10 prototype. The sensitive volume consists of 62 kg of LXe and is viewed by two arrays of total 178 PMTs, while the total amount of LXe is 161 kg. The active LXe target is enclosed in a PTFE cylinder of 15 cm radius and 30 cm height. The PTFE cylinder reflects scintillation light with high efficiency, and separates optically the LXe target inside the TPC from the surrounding LXe. 64 PMTs turn the outer LXe volume into an active veto, with a total mass of 99 kg, including LXe layers above the top and below the bottom PMT arrays. In 2012, the XENON100 experiment released results from data acquired over 224.6 days within a fiducial volume containing 34 kg of liquid xenon and with an ultra low background. After unblinding the region of interest, two events were observed, consistent with the total background expectation of (1.0 +-0.2) events. A Profile Likelihood analysis of these data leads to the best upper limit on the spin independent elastic WIMP-nucleon scattering cross section, with a minimum of 2 x 10-45cm2at 55 GeV/c2and 90% confidence level (E. Aprile et al.Phys. Rev. Lett. 109, 181301 (2012)).

Spokesperson
This email address is being protected from spambots. You need JavaScript enabled to view it. (Columbia University)

Department of Physics and Astronomy, University of Bologna and INFN-Bologna, Bologna

Nikhef and the University of Amsterdam, Science Park, Amsterdam, Netherlands