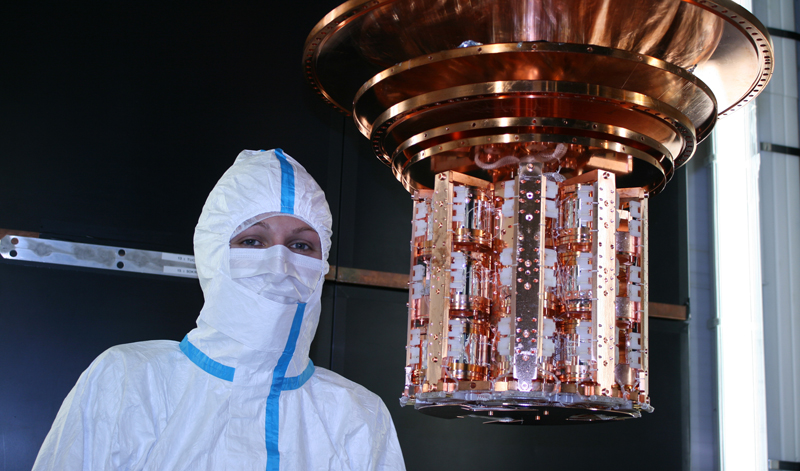 The CRESST (Cryogenic Rare Event Search using Superconducting Thermometers)  experiment is a search for WIMP dark matter particles via their elastic scattering off nuclei. The nuclei are in the absorber of a cryogenic detector, capable of detecting the small energy of the recoiling nucleus which has been hit by an incoming WIMP. Searching for very rare interactions with a low energy deposit involves two major aspects: a sensitive detector and a highly efficient suppression of backgrounds.
The cryogenic detectors developed by the CRESST collaboration are extremely sensitive and can measure the total energy deposited by an interacting particle. The detectors are run near 15 mK, in the middle of the W-film transition between its superconducting and normal states. Here a small change in the temperature of the superconducting film leads to a relatively large change in its resistance that we measure with a SQUID. To a good approximation, the high frequency phonons, created by a particle interaction or the absorption of light do not thermalize in the crystal until they are absorbed in the TES.  The high sensitivity of TES allows the CRESST detector to measure energy releases as low as 0.4 keV.
To achieve an efficient background discrimination, the detector modules developed for CRESST are based on scintillating CaWO4 crystals as absorbers. In these crystals a particle interaction produces mainly heat in the form of phonons, but in addition a small amount of the deposited energy is emitted as scintillation light. The amount of scintillation light depends on the type of the interacting particle. Therefore, when a second smaller calorimeter is added to detect this light, most common backgrounds can be eliminated through their light signal. CRESST detectors are thus extremely suitable for WIMP search, given their sensitivity and background rejection features. Moreover the different response to WIMP scattering of the different nuclei of which the absorber is composed (the light oxygen, the medium weight calcium and the heavy tungsten) makes CRESST a unique tool to prove a possible WIMP signal and, if confirmed, even to investigate WIMP properties in detail.
Here you can find an animation of the experiment in English, German or Italian.
Spokesperson
This email address is being protected from spambots. You need JavaScript enabled to view it. (MPI München)

The CRESST collaboration combines about 40 physicists from six institutes. Information about these institutes and the individual CRESST groups is available through the following links:

The experiment is located at the Gran Sasso underground facilities, hosted by the Laboratori Nazionali del Gran Sasso.

A complete list of our publications can be found on our official web page:
http://www.cresst.de/pubs.php