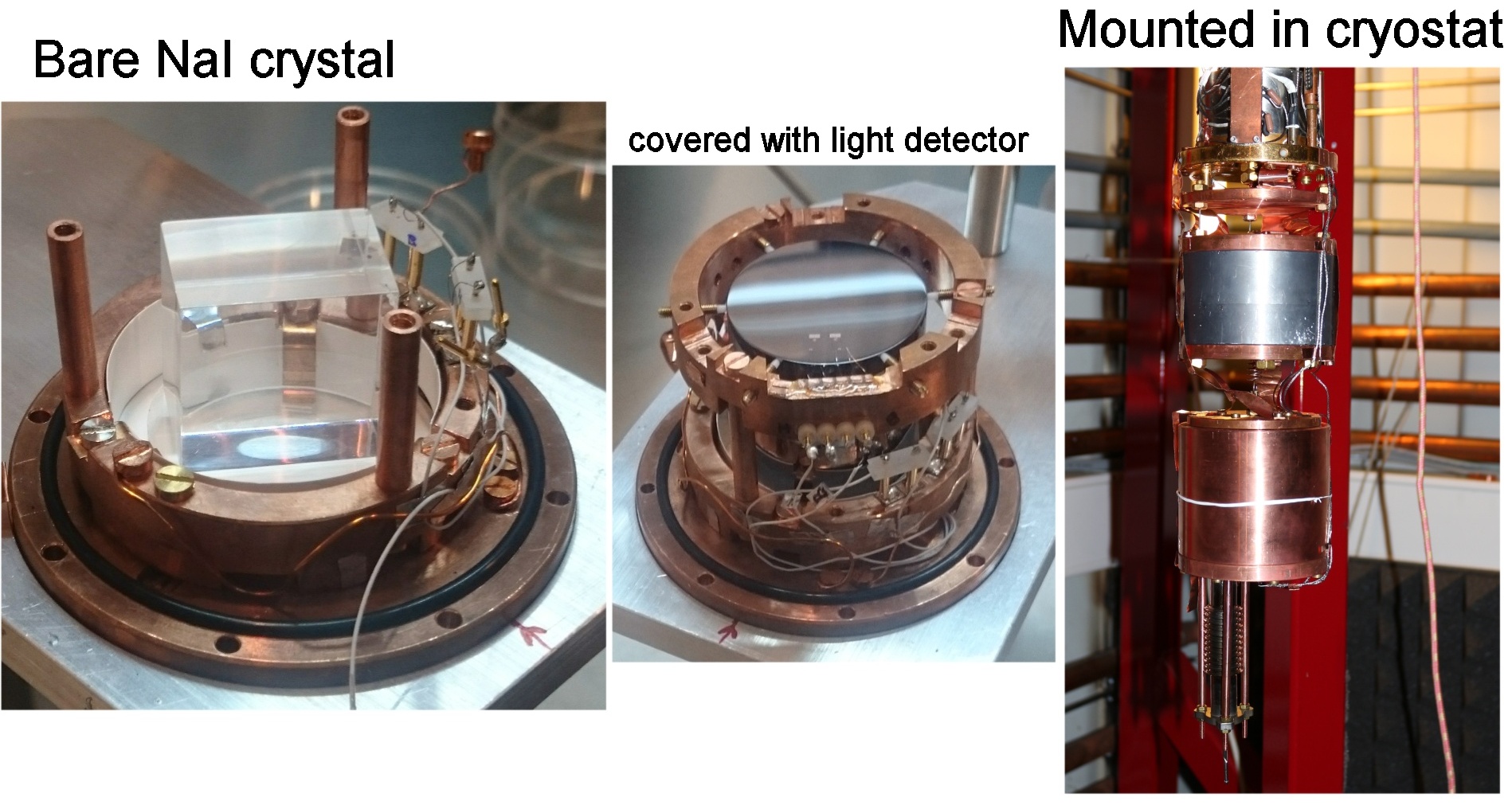 Dark matter makes up for more than a quarter of the matter-energy composition of the Universe, exceeding the amount of ordinary, baryonic matter by a factor of about five [1]. Until today the presence of dark matter is discerned by gravitational interactions only and to decipher its real nature remains one of the hot topics of modern physics. Remarkably though, several direct dark matter searches, in particular the DAMA/LIBRA experiment [2], observe an annual modulation signal which matches the expected signal from a dark matter particle, but is inconsistent with null-results of most other direct dark matter searches.
Since different experiments use diverse target materials, a direct comparison of their results is only possible under certain assumptions on the interaction of dark matter with ordinary matter. Therefore, the only way to provide a model-independent cross-check of the DAMA/LIBRA dark matter claim is the use of the same target material as DAMA/LIBRA, but in a different experiment.
Within COSINUS we aim to develop a cryogenic scintillating calorimeter operated at around ten milli-Kelvin using undoped sodium iodide (NaI) scintillating crystals as target. In addition to the aforementioned direct comparability to DAMA/LIBRA, such a detector potentially has a significantly lower nuclear recoil threshold combined with particle discrimination, both unique features in the family of NaI-based dark matter searches.
In a cryogenic scintillating calorimeter two signals are detected: the phonon signal (heat signal) and the scintillation light signal. While the phonon signal precisely measures the energy deposited in the crystal by the particle interaction, the light signal provides particle discrimination, as the amount of scintillation light produced strongly depends on the particle type. Particle discrimination allows to separate potential signal events (nuclear recoils) from common backgrounds (beta/gammas) – a crucial advantage for any rare event search. Furthermore, the possibility to even discriminate nuclear recoils off Na and I in a COSINUS detector is a very powerful tool to study rare-processes on target nuclei.
A basic scheme of a future COSINUS detector is depicted in figure 1. The NaI crystal is attached to a carrier crystal which is equipped with a dedicate temperature sensor, a so-called Transition Edge Sensor (TES). The carrier crystal concept has two motivations: first, due to its hygroscopic nature a direct evaporation of the TES on NaI would destroy the delicate crystal. Second, carrier crystal and beaker-shaped light absorber completely enclose the NaI crystal and, thus, create a fully-active surrounding of the target crystal allowing to veto any alpha-related background. Alpha-induced nuclear recoils are of concern as their signals may mimic dark matter events (also featuring low energy and little scintillation light).

In order to arrive at a comparable sensitivity to DAMA/LIBRA we aim for an energy resolution of the NaI calorimeter of sigma=0.2 keV, corresponding to an energy threshold of 1 keV, independent of the interacting particle.
Figure 2 shows simulated data for an exposure of 100 kg-days for a COSINUS detector meeting the performance goals. Data points are plotted in the light yield vs. energy plane. The light yield is defined as the ratio of light to phonon signal, normalized to one for beta/gamma interactions. Black dots are events originating from a flat beta/gamma-background contribution of 1c/(keV kg d) plus a 40K contamination with an activity of 600 μBq corresponding to the DAMA/LIBRA background budget [3]. In the horizontal bands the following event classes are expected: beta/gamma-events in black, scatterings off Na and I in blue and green, respectively. The contribution from 40K is visible as a line at around 3 keV in the beta/gamma-band. The red events result from a contribution of a hypothetical dark matter particle with a mass of 10 GeV/c2 and an interaction cross-section of 0.0002 pb. This hypothetical particle is consistent with the interpretation of the DAMA/LIBRA modulation signal by Savage et. al [4].
In addition, there are magenta-colored boxes shown in Figure 2. These boxes indicate the regions which may contribute, apart from the electron/gamma-band, to the DAMA/LIBRA energy range of positive modulation detection corresponding to an energy interval of (2-6) keVee (ee= electron equivalent). The lower energy threshold for nuclear recoils together with the exponential rise of the expected dark matter recoil spectrum toward lower energies, is the main advantage of the cryogenic calorimeter detection technique.
The possibility of particle identification on an event-by-event base renders the detection technique of COSINUS unique among other NaI-based detectors as it offers the possibility of identifying any target-specific particle interactions and to suppress background.
In case the interaction observed by DAMA/LIBRA is on the electrons of the NaI target only the excellent energy resolution and energy threshold remains while the benefit of particle-identification fades away as the signal is to be searched for in the electron/gamma-band. Since electron recoils are the dominant background in such detectors low radioactive contaminations in the NaI crystals and the experimental setup then would play the key role to enhance experimental sensitivity.
If we achieve comparable performance to already existing scintillating bolometers, as e.g. used in the CRESST experiment [5], a future dark matter search based on COSINUS detectors, has the potential to shed light on the following aspects: already small number of detector modules, operated in a low-background environment and simply counting the number of recoil events would allow to give an answer on the nature of the DAMA/LIBRA modulation signal: Is it nuclear recoils or not? Beyond that, in an upgraded phase operating a small array of detectors for multi annual cycles the COSINUS technique is well suited also for modulation signal detection.

Spokesperson
This email address is being protected from spambots. You need JavaScript enabled to view it. (INFN Roma)
Collaboration