The LUNA (Laboratory for Underground Nuclear Astrophysics) main aim is to investigate nuclear fusion reactions that generate most of the stellar energy and allowed the synthesis of the elements in stars and in the primordial Universe. Such reactions have a very low probability (cross section) at energies of astrophysical interest and are thus very difficult to be measured in a laboratory at the Earth’s surface, where the cosmic background would mask the feeble signal. During the last 25 years, LUNA installed two accelerators in the underground laboratories of LNGS and measured a few key reactions of the Hydrogen burning and of primordial nucleosynthesis. In the next future, a new accelerator that will allow to measure reactions of the Helium and Carbon burning cycles will be installed.

The LUNA 400 kV accelerator was installed in the underground laboratories of LNGS in the year 2000. It is a single stage “Cockcroft-Walton” accelerator that can provide intense beams of protons and helium with a very good stability over time and an excellent energy resolution. The beam of the LUNA 400 kV accelerator can reach a solid or gaseous target through two different beam lines. Solid targets are usually produced by implantation, evaporation or anodization techniques and are cooled with water in order to dissipate the power that the intense beam can deposit on them. Targets are mounted close to a copper tube cooled with liquid Nitrogen in order to avoid Carbon buildup on the target surface. The gaseous target is of the “differentially pumped” type and has no windows that would degrade the energy of beam particles. The different pressures, from mbar in the real target section to 1E-6 mbar at the beam exit of the accelerator, are maintained through a system of pumps and collimators. Nuclear reactions occurring in the interaction of beam and target can emit photons or charged particles. Photons are generally detected by high purity Germanium detectors (HPGe) or BGO scintillators; charged particles are instead revealed with Silicon detectors. A passive shielding of Lead and/or Copper can be used to diminish the environmental background. Eventually, a “radon box” can enclose the shielding: by substituting normal air containing Radon with Nitrogen inside the box it is possible to further reduce the environmental background. Underground, a passive shielding is much more effective since the secondary radiation usually created in the shielding itself is reduced due to the lower cosmic muonic component. The combination of cosmic background reduction offered by the underground laboratory and passive shielding, make the LUNA experiment an ideal place to measure cross section of nuclear reaction of astrophysical interest. In the last 25 years, LUNA obtained very important results in the field of nuclear astrophysics: with the first accelerator installed underground in the period 1992-2001, LUNA 50 kV, it was possible to measure the 3He(3He,2p)4He reaction inside the full Gamow peak of the Sun and exclude the existence of low energy resonances. A resonance in this reaction was early invoked by the Nobel prize W. Fowler to solve the so-called “solar neutrino puzzle”, namely, the smaller than expected solar neutrino flux measured by an experiment realized in the ‘60 by another Nobel prize, R. Davis. Indeed, a low energy resonance in the 3He(3He,2p)4He reaction would have disfavored the branch of the Hydrogen burning p-p chain that produces 8B, whose decay releases the neutrinos actually observed in the Davis’ experiment. Then, LUNA measured the key reaction of the CNO cycle of Hydrogen burning, 14N(p,γ)15O, finding a cross section a factor of 2 lower than previous estimations. Among the many important implications of this measurement, we recall the reduction (about a factor of 2) of the number of neutrinos we expect should be produced by the CNO cycle in the solar core. Moreover, the estimation of the age of the Globular Clusters, groups of stars which are among the oldest objects in our Galaxy, has been revised in such a way that the Milky Way should be about 1 billion year older than previously believed. The cross section of the 3He(4He,γ)7Be reaction was another key measurement, very important both for primordial nucleosynthesis (the 7Li production, in particular) and for the solar neutrinos due to the 7Be and 8B decays. The experimental result obtained by LUNA , combined with other data from higher energies measurements performed in laboratories located at the Earth’s surface, allowed a reduction of a factor 2 on the uncertainty of the solar model predictions for the 7Be and 8B neutrino flux. More recently, LUNA efforts were concentrated on reactions important for stellar nucleosynthesis, like the 25Mg(p,γ)26Al, which is the main process responsible for the production of 26Al in different stellar environments, or, more recently, the 17O(p,γ)18F. The latter was measured at energies relevant for Novae, i.e. compact stars belonging to close binary systems, periodically undergoing violent thermonuclear runaway on their surface. Two different and complementary experimental techniques have been employed for this measurement. The resulting reaction rate, a factor 4 more precise than that previously available, allowed us to substantially improve nucleosynthesis models for Novae and, in turn, to reduce the uncertainties on the predicted abundances of various isotopes, among which those of oxygen, fluorine and nitrogen. In addition, LUNA measured the cross section of the key reaction for 6Li primordial production, 2H(α,g)6Li. In such a way, it has been possible to rule out previous claims about the possible production of this isotope during the Big Bang nucleosynthesis. The future LUNA experimental program is very rich and contains several reactions of great importance for astrophysics and cosmology. Moreover, the forthcoming installation of a new accelerator in Hall C (LUNA MV), will allow to measure key reactions of Helium and Carbon burning, like the 12C(α,γ)16O, fundamental to study the evolution of massive stars, the 13C(α,n)16O and 22Ne(α,n)25Mg that provide the neutron flux necessary for the s process (slow neutron capture) responsible of the formation of medium mass nuclei, and the 12C+12C with emission of protons or alpha particles, the most important reaction of Carbon burning.

After the successful results obtained in more than 15 years with the LUNA 50kV and LUNA 400 kV accelerators, in 2007 the LUNA collaboration proposes the installation at LNGS of a new machine able to deliver higher energy beams compared to the previous accelerators. The new LUNA MV accelerator, with a maximum terminal voltage of 3.5 MV, would allow to study reactions happening in stars at temperatures between 500 millions and l billion degrees, i.e. at energies higher than those investigated with previous accelerators.
In the successive years, the LUNA MV project is defined more precisely and a real feasibility study starts. Thanks to the financing obtained by the ltalian Research Ministry (MIUR), which recognizes the potentiality of the project to consolidate the capabilities of LNGS, the purchase of the accelerator and the construction of the infrastructure to host it can become true.
The installation of the new accelerator in the Hall B of LNGS is foreseen for the 2019. The machine will be able to deliver intense beams of protons, alpha particles and Carbon ions to two different beam lines, one equipped with solid targets and the other with gaseous targets. The machine and beam lines will be hosted in a concrete infra­structure, 80 cm thick, able to provide a complete shielding of the accelerator compared to the rest of the LNGS Laboratory.
In this way, even the very low neutron flux expected from the reactions under investigation will not interfere with the measurements of other experiments running at LNGS.
The scientific program of LUNA MV is very ambitious and extended over time. The main aims are to study the key reactions of Helium and Carbon burning, and the so-called neu­tron-source reactions, which produce the neutron flux necessary for the formation of most of the elements heavier than lron. 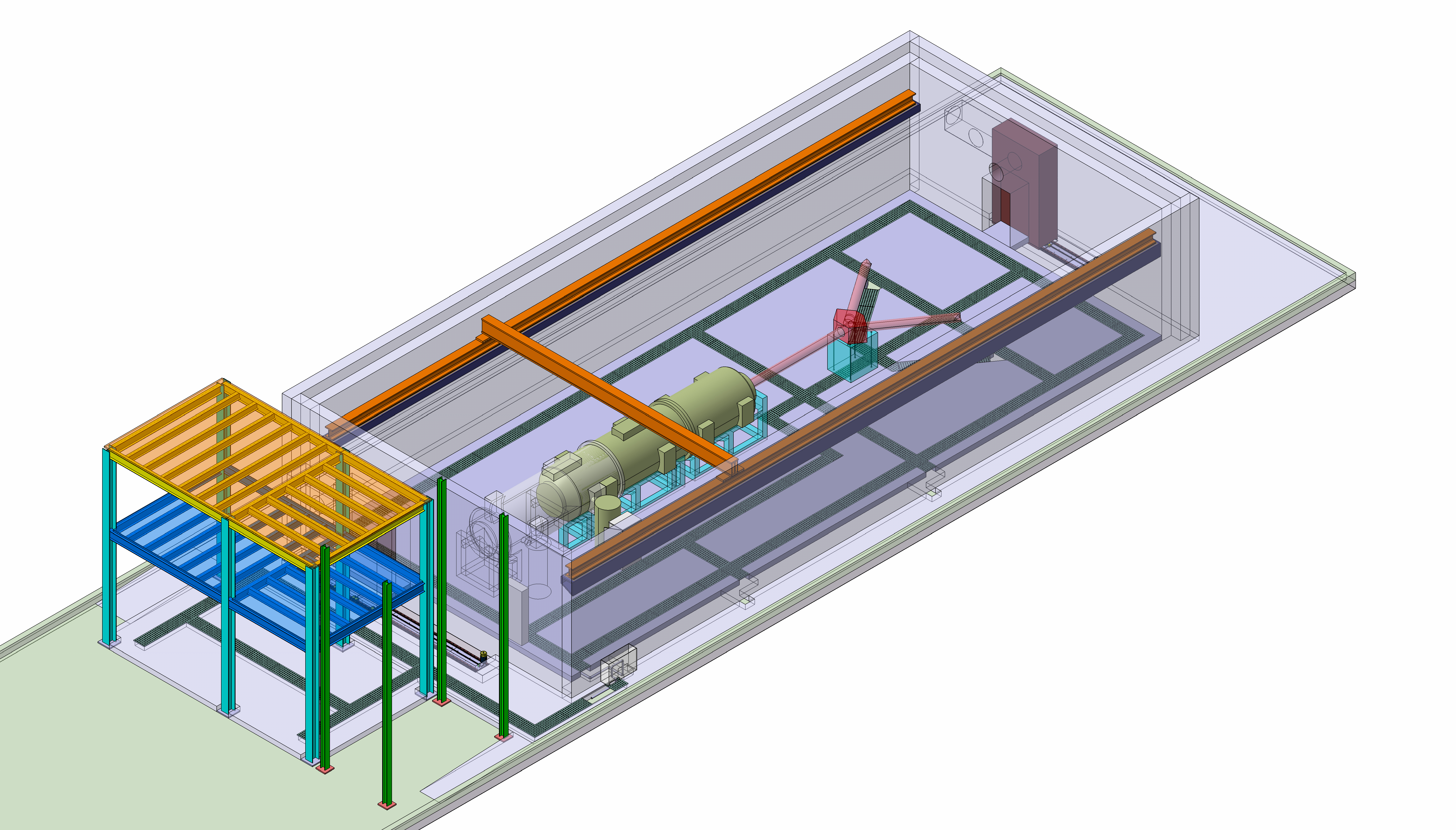 Spokesperson
This email address is being protected from spambots. You need JavaScript enabled to view it.(Federico II University of Napoli and INFN)